You can touch this – Windows 8 is here

This has gotta be one of the most anticipated computer releases this year – the launch of Microsoft Windows 8.

My very first computing experience was with DOS, and later I was introduced to Windows 3.11 and eventually when I built my first computer, I installed Windows 95 on it. Like many others, I used quite a few variants of Windows over the years – Windows 95, 98, 98SE, Windows NT, Windows 2000, XP, and latest on my work machine – Windows 7.

I thought Windows 7 was quite a big leap forward from Vista, but after the launch, it was apparent that Windows 8 is at least as big a jump from Windows 3.11 to Windows 95, or maybe even bigger. It was impressive.

I had the good fortune to be invited to the launch event of Windows 8 at Lowyat Plaza on the 29th October 2012.

I arrived a little early to check out some of the machines on display running Windows 8. They come in many form factors, but they share a common feature that was lacking in almost all previous desktop/laptop computers – touch screen.

Shah and Huai Bin among the attendees checking out Windows 8

The touch interface really does bring an extra dimension to whole computing experience, and unlike previous attempts, this one actually works.

If you think about it, it was actually a child that inherits the best of both parents  – the tablet and desktop/laptop.

and there was an Angry Bird dance group

Finally there’s a device that gives you the power to run all the traditional Windows applications, including some of the crucial business applications that we can’ t live without, and then at a simple swipe of the screen,instantly transform the desktop to a full screen, tablet type of interface – Windows 8 UI-Style.

Most of the Metro application won’t be too unfamiliar if you have  experience in using tablet or smart phones, they are usually touch optimized and cater mostly for content consumption or gaming experience.

Microsoft has also been working with local content providers to come up with quite a number of local applications available immediately via their new Windows Store – this includes The Star Online, MYDIN, AirAsia, DiGi and Sunway Lifestyle and more.

Other new features include a new fast and fluid Start screen that allows one-click access to apps and Live Tiles that provide seamless connectivity to multiple social applications including facebook, twitter, and more. Windows 8 also comes with the latest Internet Explorer – version 10. 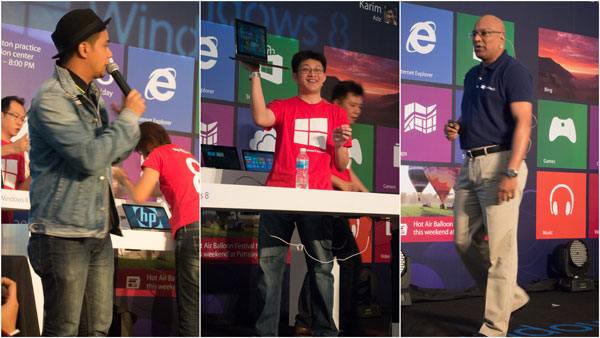 product demo time, I was quite impressed

The integration of cloud computing via Skydrive too is a pretty cool functionality found on Windows 8. Every account comes with a free 7 Gigabyte space, and with it when you sign onto any Windows 8 machines, it can pull all your customized applications/photos/settings from Skydrive to give you a personalized experience  as you would with your own computer.

participating manufacturers and MD of Microsoft having a photo op

There are already some 30 devices available right now running Windows 8. You can get your hands on them on these roadshows:

I can’t wait to check out one of these machines in details. One of my colleagues has in fact already bought the Sony Vaio Duo 11, so jealous!

Remember the good old days of computing when avoiding virus means scanning untrusted floppy disks and not accepting funny files from IRC? It was the time of megabyte hard disks and 14.4 kbps modem, and of course, a relatively trivial and safe online environment.

With the increasing popularity of the internet and diminishing use of floppy disks, computing security threats evolved to be more complicated. There aren’t just virus anymore, but trojan horses, malware, and a host of other nonsense.

This is when security software became essential of everyday computing. These days, not having your computer protected is akin to going into the African Safari naked and roam around with lions and vultures, not exactly a very smart thing to do.

A couple weeks ago I was invited to the launch of Trend Micro Titanium maximum security, the latest internet security software by Trend Micro, one of the big boys in this industry.

I have always been one of the fans of Trend Micro and been a user with their Housecall product as well as an administrator of their corporate anti-virus/malware/spam software, so personally this wasn’t just any product launch for me, I actually do have an active interest in what they are announcing.

The event was held at Grand Millenium KL over lunch time, which was rather convenient for me since it was a short walk from where I work.

I’m not gonna bore you too much with super detailed explanation on the software, but basically the points to be taken were:

The number one complaint most people have when it comes to security software is that they make computer sluggish, well there’s good news. Comparing to previous version, Trend Micro Titanium uses 47% less memory (60 MB) and a quick scan takes only 16s instead of 2 minutes.

In fact, the software is a complete rewrite with a major overhaul in the architecture as well. Pretty cool technology at that (took 5 years to complete since it’s inception). If you’re interested in the tech, go to the product page.

food at Grand Millenium KL was quite impressive too.

If you’re looking for home computing protection, Trend Micro Titanium is definitely worth a serious consideration.

By the way, the lunch at Grand Millenium was quite impressive as well, we had chicken, fish maw soup (proved that you don’t need sharks fin), huge pomphret fish (but no waiter seems to know how to properly cut them these days), butter prawns and such.