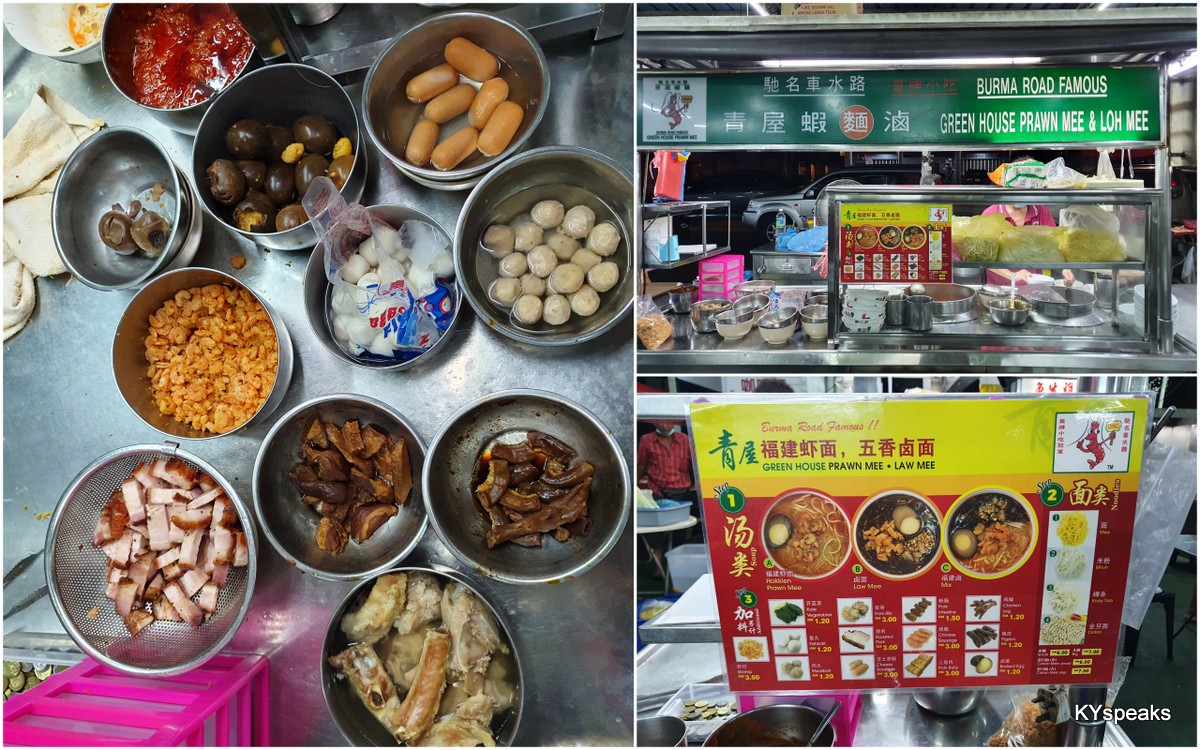 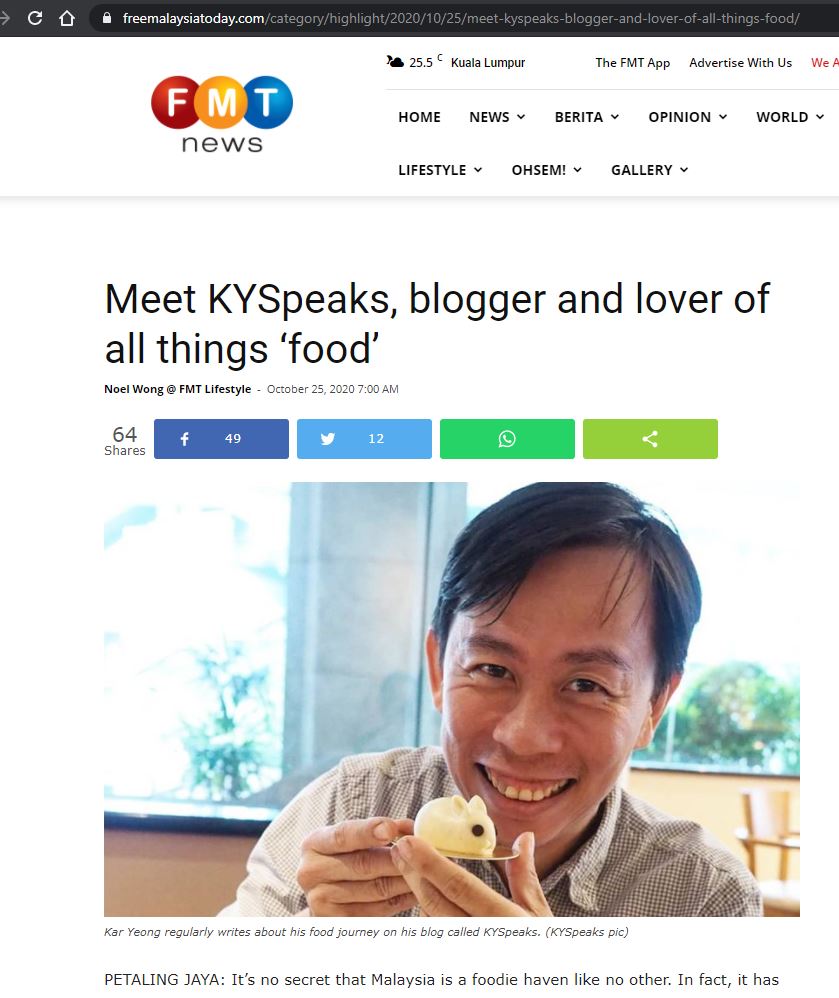 A couple weeks ago we found ourselves at Empire Shopping Gallery in Subang during dinner time, the girls decided that we should dine at Serai. A decision I very much supported since Malay restaurants that serves made to order food aren’t exactly the most common type of eateries in the country, and it’s been a while since I went to one. (Alicafe TigaRasa at USJ) 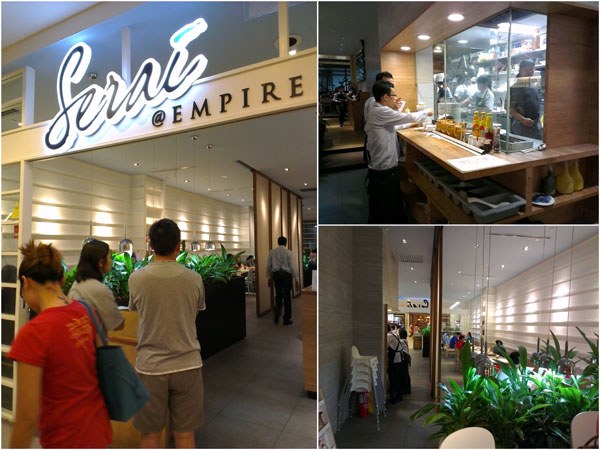 According to Horng, the restaurant was pretty quiet the first time they tried a month or two ago, but steadily picked up returning customers over that period of time. By now, you often need to wait for a bit to get a seat during busy weekend dinner hours.

Interior decoration is pretty classy, menu easy to read, and the servers seemed to be quite well trained. It is quite similar in setting to some of the more successful modern restaurants in the country, ie: Madam Kwan, Ben’s, etc. Not a bad thing I must say. 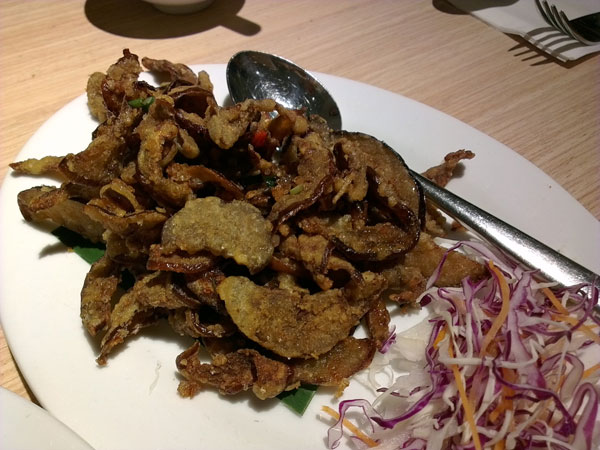 deep fried brinjal with spices, our favorite of the day

The menu weren’t super extensive, but covers most of the popular local dishes you’d expect.

The first dish that was served to us was the deep fried brinjal with spices (RM 15). Thinly sliced brinjal deep fried with sugar, spices, and chili, the combination was superb and instantly became one of the very few culinary surprises that I experienced this year.

I highly recommend this dish. 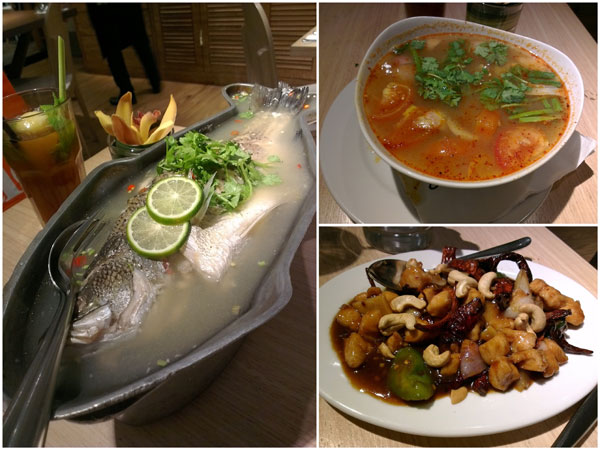 Tomyam seafood (RM 22) here was not particularly spicy, but did come with plenty of seafood ingredients and carries a pretty good aroma with distinctive good tomyam sourness. This is very good for those who can’t have it too spicy and still want to enjoy tomyam closest to it’s pure form.

We were delighted by the steamed sea bass with lime sauce (RM 54.99), the fish was fresh and tasty, but the real winner here is the soup base – it was very flavorful and very sour, so much so that it actually overlapped the tomyam a little bit, not that we minded. The only problem with this dish is for the budget conscious, for over RM 50 a pop, it’s definitely not cheap.

Chicken with dried chili (RM 15) turned out to be just a kung pao chicken dish basically. It was decent, but lack the kick and spiciness that I usually expect from it. 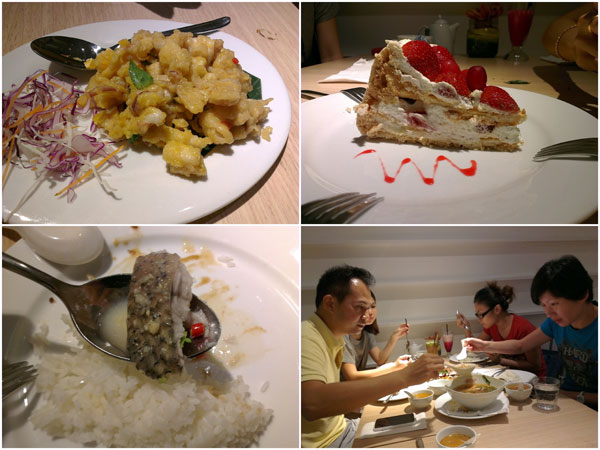 The deep fried salted egg with squid (RM 20), another classic Chinese tai chao dish that isn’t always available at Malay restaurants, is perhaps the only dish that disappointed me. It was a bit too wet, sweet, and too chewy for my liking. Your experience might vary.

For dessert lovers, the pavlova (14.8) is something to check out. It was sweet, crunchy, and simply delicious. The experience was like the best of macaroon, strawberry, and cake toppings all in one. I’m not a dessert lover, but this one I don’t mind at all, it was delicious! 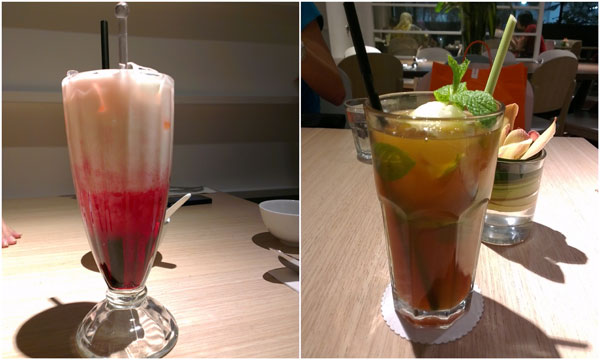 While there are some creative and interesting drinks at Serai, they certainly don’t come cheap. Serai iced tea was RM 12 each, and milky bandung will cost you RM 8.5. Even though the iced tea comes with fresh lemongrass and a scoop of lime ice cream, I felt that it is still a bit too pricey for that sort of setting, if you don’t want to burst your budget, there’s always ice water.

Ultimately, while Serai at Empire is not the most budget friendly of restaurants, the quality of food and ambiance make it a place worth visiting, so if you are looking for some modern Malay cuisine, this is certainly a place to check out 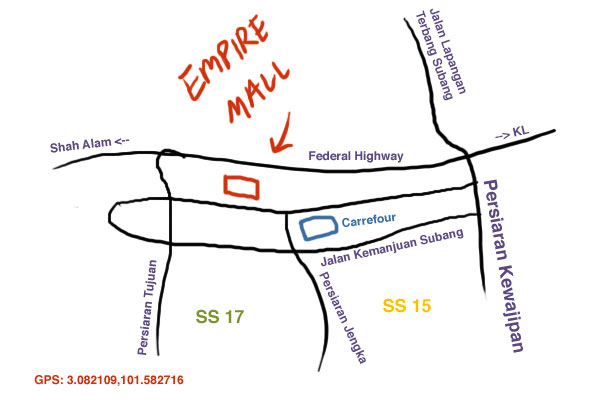 As promised on the Taman Desa Japanese BBQ post, here’s how you spend less than 1/4 the money and DIY some pork bbq goodness at home. An awesome BBQ chicken wing recipe is thrown in as well.

This BBQ was done several weeks ago when my sister and my niece were in KL to get their visa application finalised. They have moved to the states now. 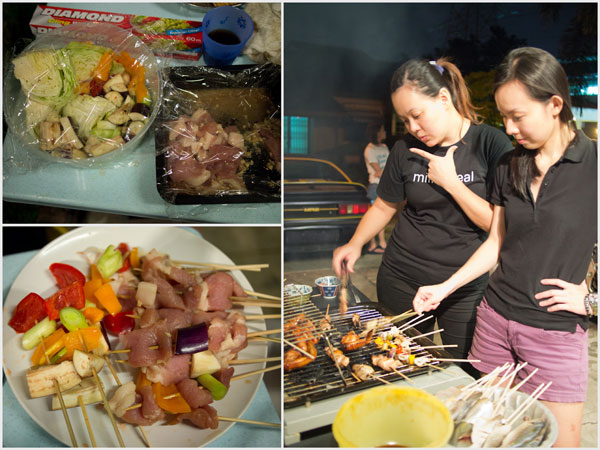 pork, chicken wings, vege, we have it all. Kerol & FA working on the grill

pro tip: soak the satey sticks in water for 5-10 minutes before BBQ to prevent burning
pro tip 2: don’t mix vege in between meat, they have different cooking time
p/s: Haze came up with the recipe and marinated the pork, everyone loved it, need to make more next time 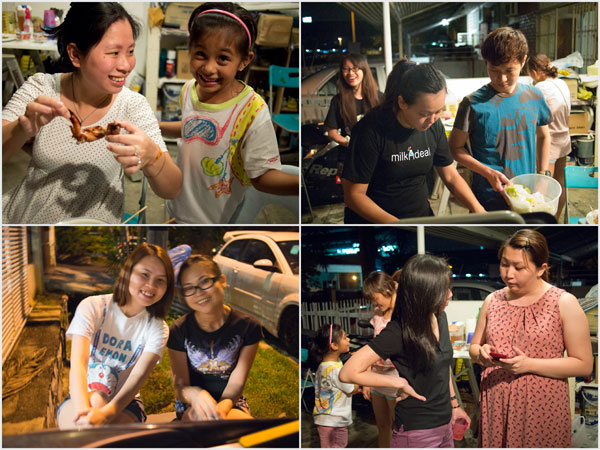 my sister & niece, with a few friends & ex housemates 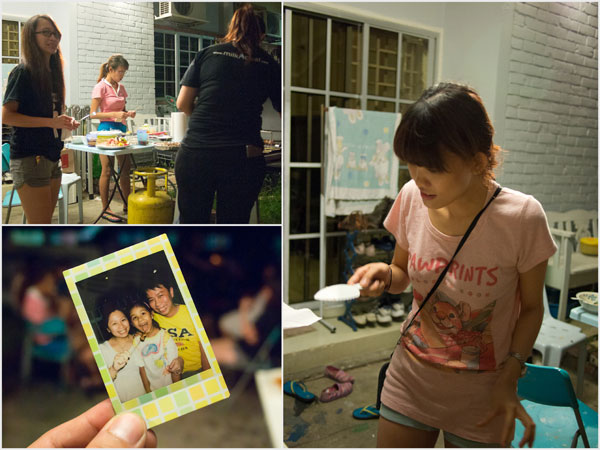 instax pic with my sister, the niece, and me. =D

That’s it, simple and yummy BBQ. The experiment was a success, will have a bigger BBQ party next time!

KY eats – Grandmama’s a better cook than your grandpa

Since I moved to the site office for work, I’ve been visiting Pavilion quite a bit due to the close proximity. So pretty soon I started exploring a bit more and a couple weeks ago, stumbled upon this curiously familiar looking restaurant on the 5th 6th floor by the name of Grandmama’s.

Grandmama’s to Madam Kwan’s is like BK to McD. The decoration is similar, and so is the menu (nasi bojari, char kueh teow, fish and chips etc). There are rumors saying they are owned by siblings or something… 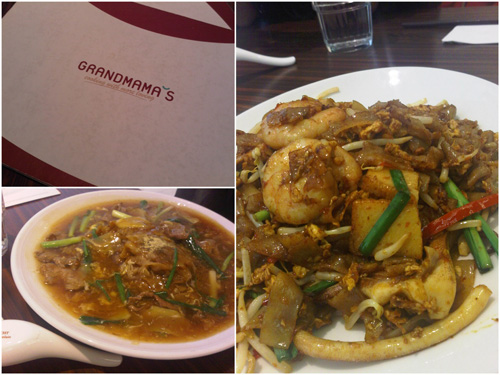 Since the initial visit with my colleague, I’ve been to the place in three separate occasions. I can happily said that the  3 different dishes tried so far have been all pretty good, at least taste wise.

The Char Kueh Teow comes with a couple big prawns, slices of fish cake, squid, chicken, and the usual chives and bean sprouts. Despite the seemingly non traditional ingredients, it turned out to be a surprisingly decent dish. The flavor and the kick is as good as you’d find from any air conditioned restaurant.

Curry Laksa, or curry mee as known to Penangites, comes in an overly large bowl and contains taupok, prawns, squid, ladies finger, and brinjal which I love. It’d be better if there’s some bloody cockles though (or coagulated pork blood, but I think that would be way too much to ask for, hehe) 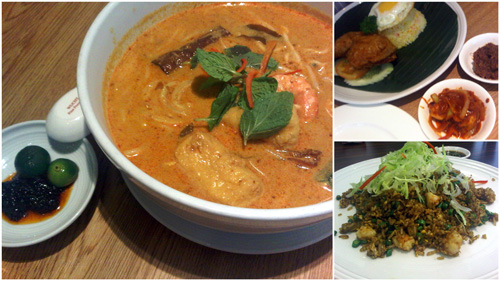 The other dish I had was the unassuming looking Hakka Fried Rice. A plate of fried rice with dark sauce that has prawns, chicken, and plenty of chopped long bean in it. This one was pretty good too especially with some cili padi to go with. I had this after Horng’s favorable comment.

Ngau Hor (beef kueh teow), Chicken Mushroom Rice and Nasi Bojari that others had too turned out to be plenty good, though my other colleague ordered Fish and Chips that tasted just average.

So while food is generally pretty good at Grandmama’s, the pricing is a bit on the higher side. Nasi bojari costs RM 22, and most other hawker style dishes are around RM 14.5 to just below RM 20. You do get free plain water though.

Still a place worth visit for it’s pretty decent quality of food and good ambiance while not always overly crowded like Madam Kwan’s. 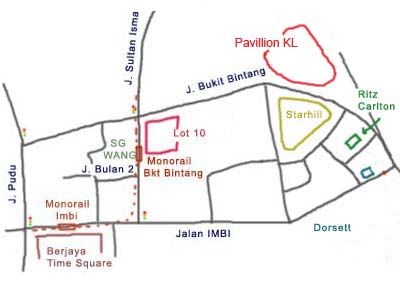