My Introduction to Green Properties by KEN Holdings

Last week a few of us were invited to little gathering at KEN BANGSAR, a classy condominium situated atop Bukit Bandaraya at Bangsar. Other than being promised that dinner would be taken care of, most of us didn’t have any idea what this was really about.

As it turns out, we were introduced to something that is relatively new in Malaysia when it comes to buildings – being green.

From the outside, KEN BANGSAR looks just like any other modern, beautifully designed condominium in KL. The 15-storey building is mostly made of concrete and glass, with a tastefully crafted swimming pool and some trees surrounding the building.

After the helpful security personnel guided us to the visitor’s parking, we gathered at the lobby and greeted by the very friendly Mr. Tan, executive director from KEN.

the gym and public bathroom at KEN BANGSAR

We were then taken a tour of the building with Tan explaining many of the minute details and plannings that went into making KEN BANGSAR a green building.

The location of KEN BANGSAR provided a natural advantage when it comes to ventilation. The building is then designed to take advantage of this by using windows louvre and sliding windows (instead of tilt and turn windows). Combining this with special glasses that reduce thermal heat from the sun, the temperature is lowered several degree Celsius, and thus minimizes air conditioning usage.

fancy this unit? you can buy it

The same windows and building design also ensures that almost every part of the condominium is lit by sunlight, thus reducing the need of artificial lights during the day.

And speaking of air conditioning, every unit has a centralized compressor with cooling pipes going to different rooms that is individually controlled. This too is done to minimize electricity usage.

we visited the penthouse, now I can get used to living like this

During the construction, raw materials such as loose ends of marble slabs and wooden linings were kept and then used at lobby and common areas. This resulted in less wastage and as a bonus, a unique non-repeating pattern of some walls, pretty neat.

The result of having all these well thought green design is that the common area (including a swimming pool, air conditioned gym) of the entire KEN BANGSAR utilizes less than RM 2,000 electricity every month, according to Tan. 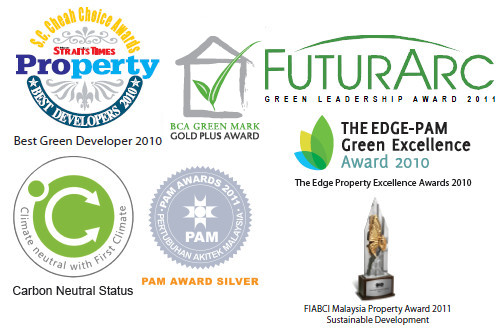 As a result of their green development initiatives, KEN has won numerous awards.

For those who are interested in landed properties, KEN RIMBA is a development by KEN at Shah Alam section 16 (near UiTM & iCity) that incorporate many of the same green technologies into the design. Houses are mostly North-South facing to maximize sunlight penetration, there’s rain water harvesting built in, and even an indoor garden for every unit. Do check that out.

KEN RIMBA’s Legian homes will be handed over to buyers in the next month, while the new phase – Jimbaran, is now open for registration and will be launched soon.