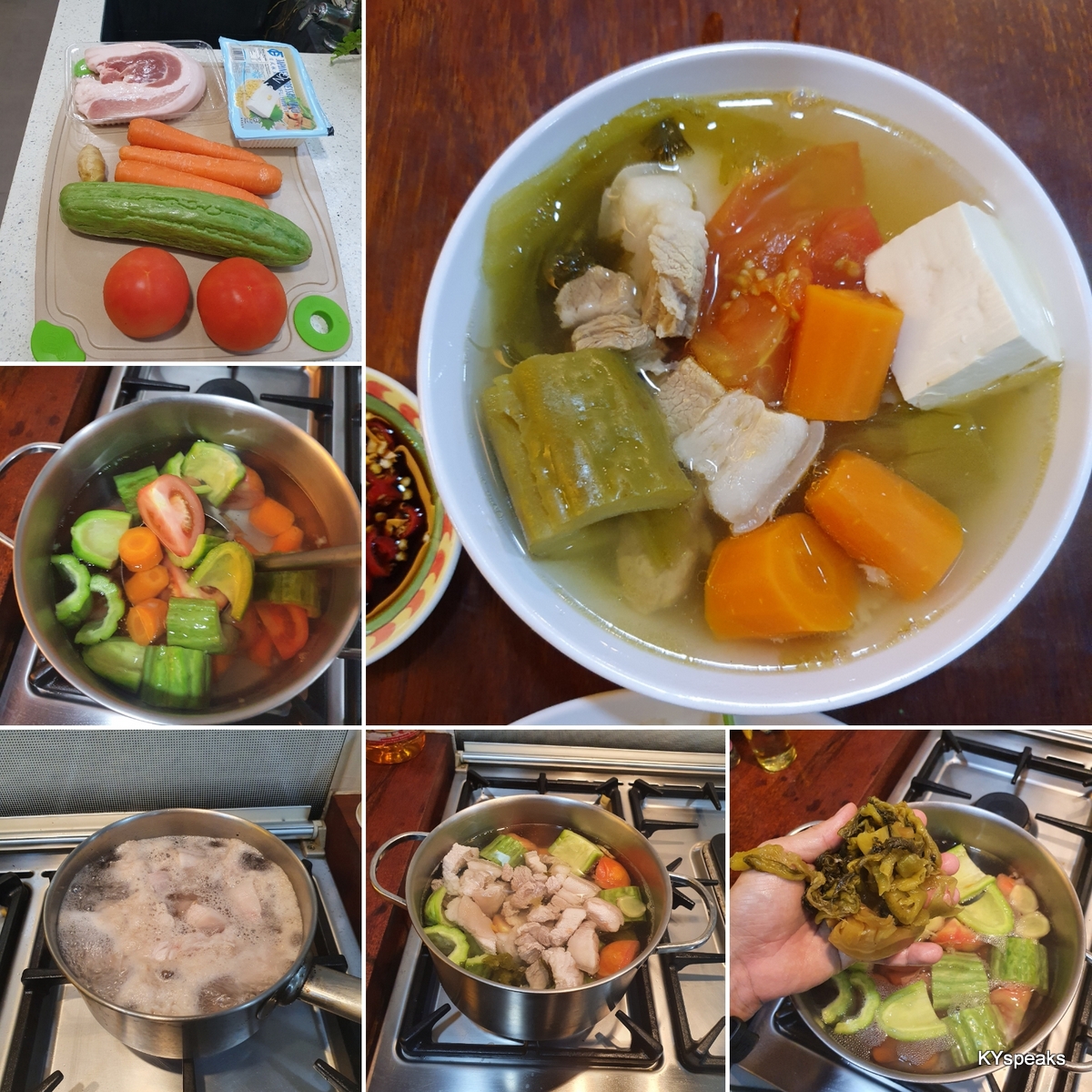 Ever have cravings for meat dumplings and ikan bakar at the same time? Well, Kota Kinabalu apparently has enough people who have this unique combo from time to time to warrant a few of these gyoza + grilled fish restaurants.

Today let’s look at one of the most popular of them – Kedai Kopi New Mui Vui.

New Mui Vui restaurant is located at Hilltop, some 10 minutes away from the heart of Kota Kinabalu, and a stone’s throw from one of the most popular tomato soup fish noodle in town – Fatt Kee (it’s good, check it out!)

Like many local eateries in this part of the country, service isn’t looked at as an area of emphasis, so don’t take anything personally. Overall however, the restaurant is comfortable enough, and hygiene is passable. 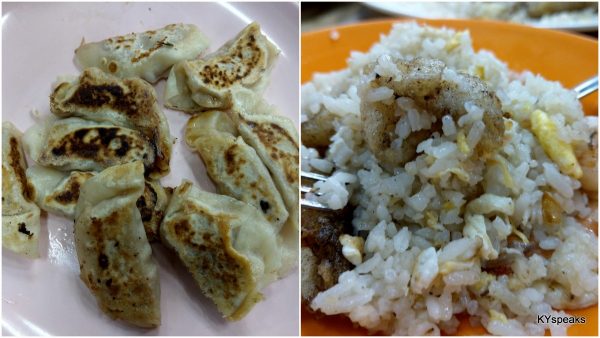 The restaurant serves gyoza, grilled fish/squid/lamb/beef, fried chicken wings/quails, as well as a fried rice and a selection of different noodle. Do note that your dishes may not come all at the same time. Menu is linked below.

We ordered those dumplings to go with a plate of seafood fried rice, as well as grilled stingray and squid for dinner. 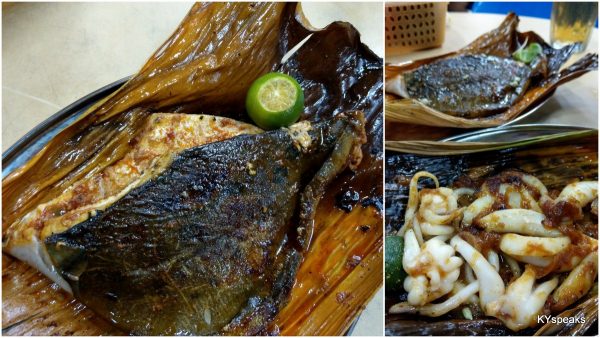 Those grilled fish and squid were actually pretty good, even though the chili sauce it came with wasn’t much to shout about. Fried rice too was rather delicious, as most seafood ingredients from KK are of rather good quality. The gyoza however, was pretty subpar if you ask me, but if you’re in KK and long for gyoza, this is one of the few places you can get some, so I guess it’s… OK-ish?

Next time I may just have chicken wings instead of gyoza. 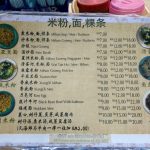 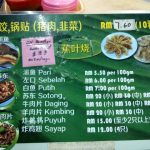 Before we start, I have a confession. I must admit that of the various ASEAN countries I’ve visited (all except Laos & Cambodia), Filipino food is ranked pretty low on the index of cuisine that gets me excited.

I’ve been to the country three times – to cover Asean Basketball League, volunteer for Operations Smile, and an awesome diving trip to Anilao. Neither of these trips got me real excited with the local cuisine, nor was my experience at the now defunct Filipino restaurant at BU Centrepoint by the name of Cagayan back in 2009.

That being said, it is always important to keep an open mind, so when my Kota Kinabalu makan buddy suggested that we try Tambayan at Kainang Filipino for dinner, I thought, why not? Maybe 5th time is the charm.

After that initial time, I’ve since returned to the place twice, I’m sort of a convert.

Tambayan at Kainang Filipino is located at Api Api Centre, a commercial area at the capital city of Sabah just a short walk away from Marriott & Prominade hotel. The restaurant itself isn’t particularly fancy and usually not overly crowded.

The menu (check the pics below) is pretty extensive for a restaurant this size, there are set meals, noodle, pasta, single rice dish, as well as various cook-to-order dishes separated into different categories of pork, soup, beef, vegetable, seafood, and so on. 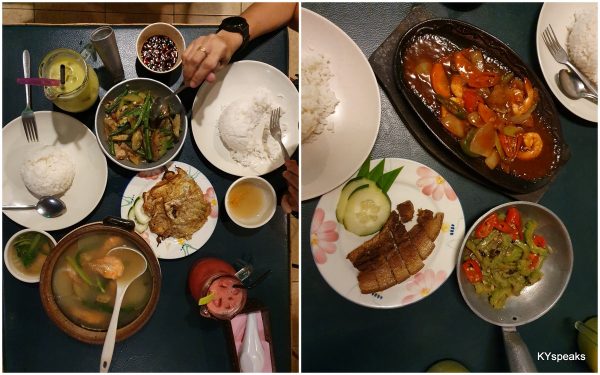 dinner for two on different visits 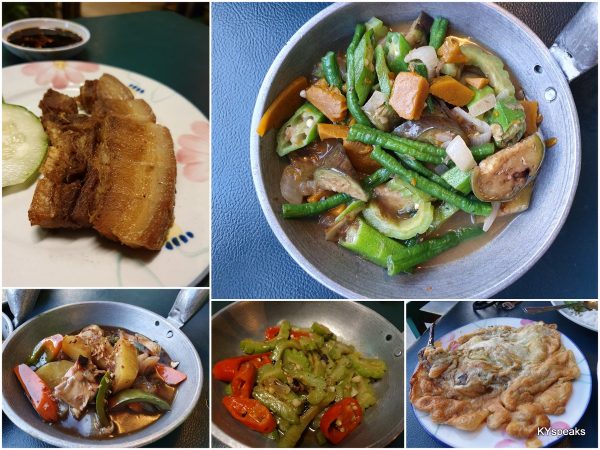 The adobo were quite flavorful, with the sauce carrying a bit of sourish taste that was also rather savory, vege dishes comes with a strong dose of fish sauce and are generally quite well cooked, I enjoyed them quite a bit.

As for crispy pork, I do feel that this is less crunchy and perhaps does not carry that sodium goodness compared to our Chinese siu yok.

However, the dish that I ended up always ordering is that awesome eggplant omelette. It is basically just your basic purple colored eggplant sliced open and have a fried egg engulfing the whole thing, wouldn’t have expected it to taste so good!

with my KK makan buddy

So if you’re at KK and have an open mind to trying out food that’s of lesser popularity in Malaysia, head to Tambayan at Kainang Filipino. You may like it, you may not, but it’ll be a different gastronomical journey nonetheless. 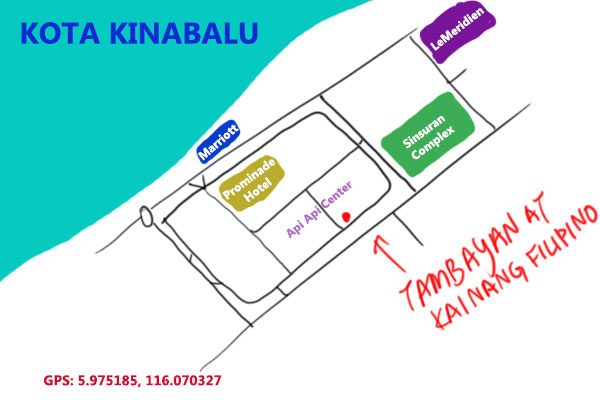 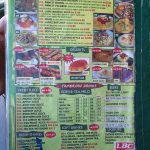 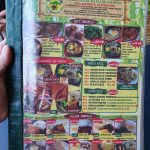 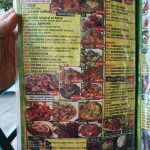 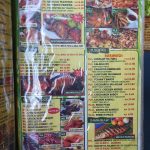 My day job brings me to Kota Kinabalu quite often these days, which is a bit of a blessing when it comes to work travel as this North Borneo city does offer a full package of beautiful ocean & beaches, the magnificent mount KK, and a host of rather unique hawker dishes not easily found this side of Klang Valley. I’m also particularly blessed to have friends who would bring me to explore these places.

During my last visit, I had to go offshore for a short stint. For Sabah, that meant using the old Terminal 2 at BKI airport (who has flown Air Asia flight via this side before?). On my return trip, my friend Yann May picked me up and we decided to stopped by this rather busy looking kopitiam located by Tanjung Aru, between Terminal 1 and Terminal 2 of the airport.

As it turned out, this was the famous Kedai Kopi Wah Juan that offers mixed pork (or pork offal) noodle which if I remember correctly, is an addiction of a friend who claimed to eat clean otherwise. 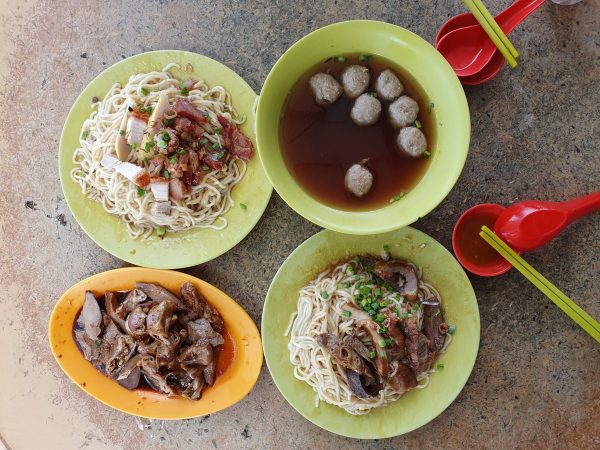 our lunch spread for two

Well, the result? It was awesome!

Can’t say much about those BBQ & roast pork, but the pork offal was on point, soft, flavorful, and properly braised to perfection. In addition, the home made noodle were superb as well, subtle in taste which compliments the other ingredients, and soaks up those sauce just nice. The beef ball soup too did not disappoint, and would be something I order again.

If I had to nitpick, they could do with slightly better chili paste, that’s about it. 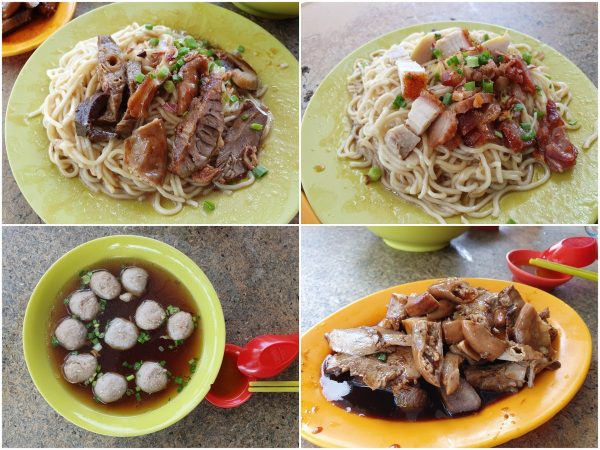 If you’re at Kota Kinabalu and does eat pork innards, this is surely a place to check out. 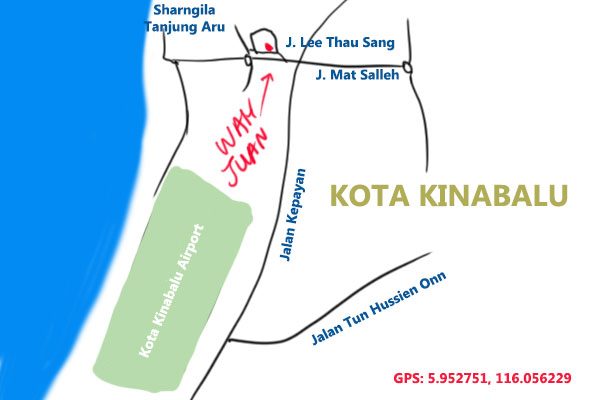 I think I’ve just found my favorite restaurant at Kota Kinabalu for dinner, and yes, it does have seafood like any other “tai chao” places in Sabah, but no, it’s not one of your typical big seafood restaurants in North Borneo.

Of course, we’re talking about Tung Fong Seafood at Inanam. 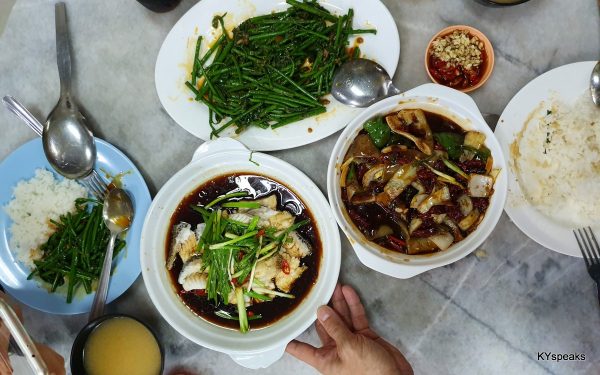 For those who aren’t familiar with this area, Inanam is located about 10 km away from KK city center, and you’ll be right to say that this area is mostly frequented by only by locals, Chinese or Korean tourists can’t be found here.

One of my favorite Tuaran mee is also found at this suburb – Tuaran Mee Restaurant.

The restaurant is pork free, and they have their menu hooked up on the wall ala billboard style for your convenience (see below). While carrying a variety of typical Chinese taichao dishes, the claim of fame for Tung Fong is their fish dishes.

You basically pick the type of fish/seafood you want – from garupa, green wrasse, giant garupa, sea carp, to fish lips, innards, and sea cucumber; then pair it with the preparation method of  your choice – braised, onion ginger, scallion oil, rice wine, or black bean. 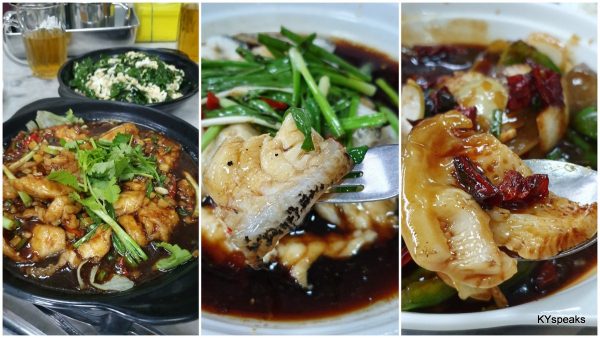 I’ve already been to this place three times on the past three trips to the city.

Had two different types of garupa as well as the rather interesting fish lips. The fish here are so, so, so good! Fresh, flavorful, and prepared with seasoning that doesn’t take away the natural flavor of these seafood. They’re simply addictive. 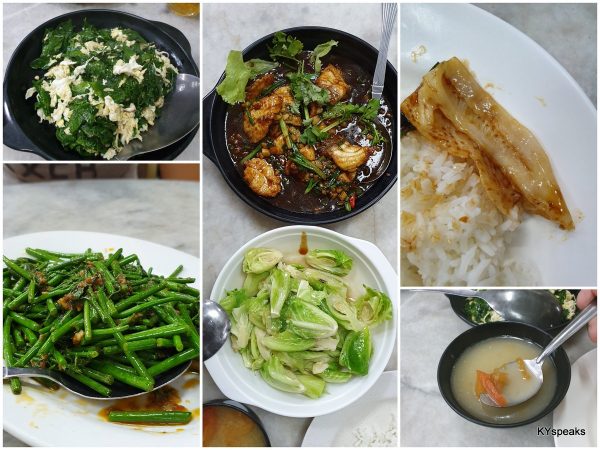 the other accompanying dishes were good too

The vegetable dish here are typical of Sabah standard, sweet, crunchy, and fresh. They also serve a side of tomato soup as standard, and these tasted pretty much like Fatt Kee’s fish noodle soup.

If you’re at Sabah, do yourself a favor and check this place out. Expect to spend some RM 30-40 per pax for some good seafood.

In North Borneo, the most often talked about hawker dish by visitors is undoubtedly fish noodle, and justifiably so due to the abundance of great seafood here. However, for the locals, often times a good plate of Tuaran Mee is where it’s at. 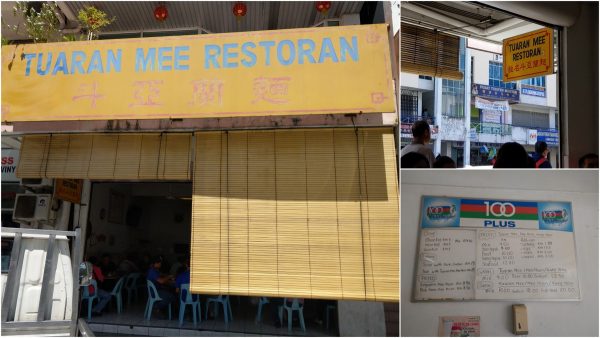 For those who’re not familiar, Tuaran Mee is a type of noodle originally hailed from Tuaran, the district just north of Kota Kinabalu. The noodle carries a texture that’s unique to its own, which I can only describe as having a springy texture almost but not entirely alike a mixture between yee mee and kolo mee.

I really like it, and think it’s about time someone introduce this to the West Malaysia scene.

Without driving up to Tuaran, one restaurant that offers a unique take on this dish is none other than the aptly named Tuaran Mee Restoran at Inanam, located some 15 minutes away from the city center.

The menu is found hung on the wall and giving diners a choice of noodle that are fried, in soup, or even in claypot. You then pick the different ingredients of choice – seafood, beef, or pork. 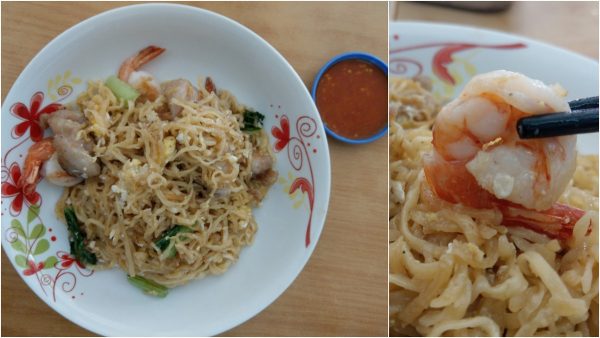 Most interestingly though, you get to add Lehing, the locally produced alcohol.

For obvious reasons, I had my Tuaran mee with seafood and Lehing, resulting in a dish that had that extra sweetness from the extra dash of forbidden condiment. The seafood was competent, and I thought I really enjoyed the accompanying chili sauce as well. I’d recommend this to anyone. 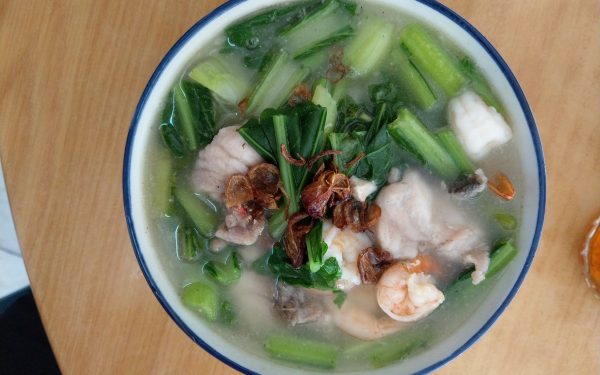 My lunch partner had meehun soup with seafood that came with plenty of those fresh vegetable that Sabah is known for and reportedly happy with her decision as well. It was a good meal, and I think I’d be back there again hopefully in not too distant future. 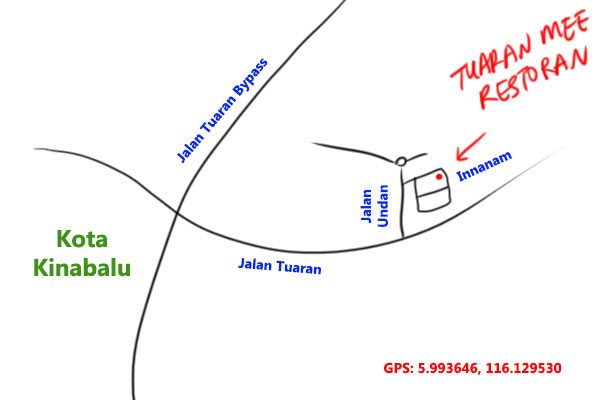 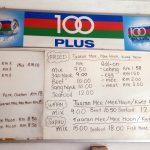