If you haven’t check out the inaugural The Star People’s Food Awards yet, you should. Head to mob.com.my to nominate and vote for the different categories of food every month for a total of 12 months, from June 2014 to May 2015.

I’m honored to be chosen as one of the seven judges for this awards, and last week, five of us met up at Menara Star for a small get-together and had a little chat. The following article is the result from the meet up.

The article is shamelessly reproduced from The Star Online titled “More than just good taste” on the Saturday, 12 July 2014 and written by Kathleen Michael. 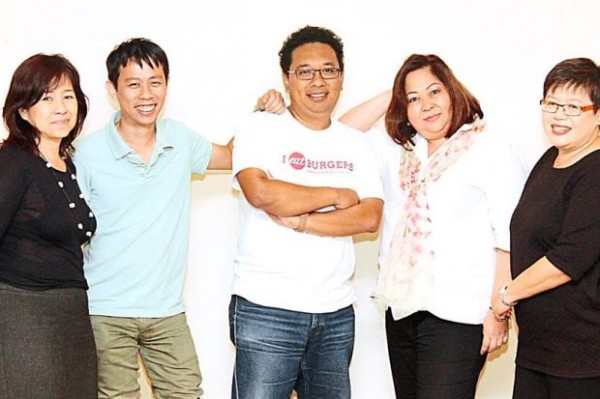 Ready to eat and decide: (from left) Wong, Kar-Yeong, Adly, Wan and Yong
are in the line-up of judges for The Star People ’s Food Awards

Since June, The Star in collaboration with Metro Online Broadcast (MOB), a citizen journalism portal, has been calling out to street food lovers to nominate and vote for their favourite street food eatery.

The initiative is to recognise the best Malaysian street food in the Klang Valley, aptly named The Star People’s Food Awards.

Each month, a new street food category is introduced and readers nominate and vote for their favourite category-based street food.

The award was set up to give recognition to restaurant or vendors who continue to excite their clientele’s taste buds.

It also hopes to promote and encourage culinary excellence in street food culture while preserving the country’s food heritage.

The people powered award is not just based on public opinion, as part of the decision is made by an esteemed panel of judges.

There are seven judges who know where to head to for the best of the best, but are able to debate on all things street food.

Five of the seven judges sat down with StarMetro to share their opinion about the awards and the state of street food in Malaysia.

Kar-Yeong likes the idea of championing street food because he was of the opinion that the street food culture was slowly dying in the country.

“As long as people are aware of street food and where to have them, it keeps the street food culture alive and I’m glad to be a part of it,” he said.

Out of the 12 categories, the group agreed that they were looking forward to thepopiah and nasi lemak categories.

These judges love their street food so much that when asked, “What’s your favourite street food?”, StarMetro was given the grunt of despair by judges.

“We can’t just pick one. We need the option to select at least three,” Kar-Yeong said.

The judges agreed that roti canai and nasi lemak would stand at the top of the list.

As food critics, there are certain things they will look out for when judging the eateries and their food.

Wan said taste and price mattered when it came to choosing street food.

Wong said her pet peeve was the excessive use of Monosodium glutamate (MSG) by street food vendors while Adly said great street food would depend on the consistency and passion of the cook.

“Good food in Malaysia is easily accessible at a good price. Those who make good street food are the ones who do not put lousy ingredients and are passionate about their food,” he said.

He is against stalls or restaurant that lie to consumers about the food served.

“There are so many who claim they serve Penang char kuey teow (mind you, this dish is number three in his top three list) and then when you try it, it is nothing compared to the real thing,” he said.

These days, it is also common to see foreigners as cooks, dishing up street food.

“The taste changes as they wouldn’t know how it is meant to be,” he added.

For Kar-Yeong, time spent waiting for his food plays a role in determining how he would rate his meals.

“I can tolerate waiting for about 45 minutes, and will probably return to the shop once more,” he said.

Wan and Yong agree that Malaysian culinary students did not take pride in the street food culture.

“They need motivation like the recent win by a Malaysian in Masterchef UK to tell them that Malaysian food is on par with Western cuisine.”

“Otherwise, they take street food for granted,” they said.

They also stressed that there should be classes to encourage Malaysian culinary students on local dishes and not just Western meals.

The judges agreed that besides highlighting locations with great street food, the awards would also help Malaysians find restaurants or vendors who were unknown to the masses.

“I didn’t know about Restaurant Prosperity Bowl and when it was nominated, I tried it and enjoyed their chicken rice,” Yong said.

The judges also agreed that the quality of street food was changing and the awards would hopefully help restore it to its former glory, instead of allowing it to deteriorate.

The public can take part in nominating and voting for the best street food category each month by signing up on mob.com.my

Public nomination for the current best roti canai category is now over and voting will begin on July 15 to midnight of the last day of the month.

The official announcement of the award winner and prize winners will be announced on the first week of the following month.

For details, on the Star’s People Food Awards, visit www.mob.com.my

An Viet has a pretty cool yee sang game for sure,

Makan kitchen at the latest Double Tree by Hilton

Do check out the baked goods at Maru Kafe, they ha

Here's a simple Blossoming Wonton recipe for you t

Coffee at MyNEWS is made with 100% Arabica coffee