Would you want to watch UEFA Champions League Final at Ibiza?

Searching for “Ibiza” on Google image and the photo below pops up as the first result. What a fantastic looking place isn’t it? Now imagine if you get to be there to watch the UEFA Champions League Final..

Let that sink in a little bit.

Located some 80 km off Valencia in Spain, Ibiza is the party capital of the world. It’s got awesome nightlife, fantastic electronic music, awesome beach, and on the 25th of May 2013, a private party none other than “IBIZA FINAL” hosted by Heineken, the official sponsor for UEFA Champions League seventh year running.

The good news is, you (or me!) have a chance to be there, and I do mean REALLY have a chance, cos I was once a winner, but more about that at the end of this post.

Participation of this contest is pretty simple and straight forward.

First and foremost, go to Heineken’s Kick Off to Ibiza Facebook App. You will need to like the page before you can access the app. (You have to be of legal drinking age and non-Muslim to join) 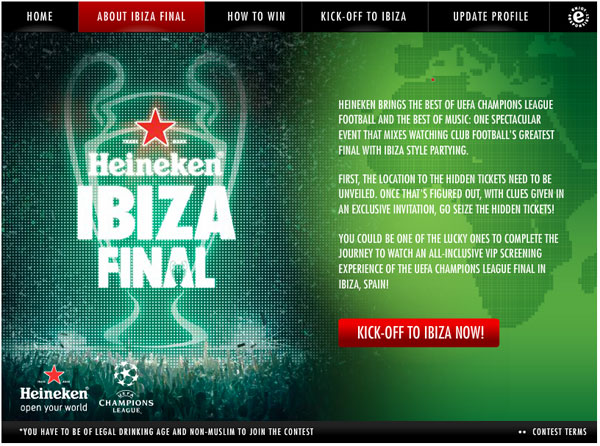 The location of the hidden Ibiza Final tickets needs to be unveiled. After figuring that out, clues will be sent out in an exclusive invitation. Those with the invitation can then proceed to the on-ground final and challenge for the all-inclusive VIP experience at Ibiza Final!

In simple English, you will be flown to Ibiza, Spain!

The first step to win then is simply by tweeting or checking in to Ibiza on the facebook application.

From now until the 20th of April, the more check-ins and tweets from the application you create, the sooner the location of the hidden tickets be revealed. So you know what to do!

By the way, remember to update your profile at the application as well to ensure that the invitation will be sent to you and only you.

In 2009 Suan, Horng, and I actually participated in the on-ground challenge (then at TTDI) and came up as the winners to the Exotic Island Tickets! We had our all inclusive invitation to Krabi and watched the EUFA Champions League final there, a match between Manchester United and Chelsea, where MU prevailed. You can read about our experience at Heieneken Star Final 2009 here & here.

I can only imagine that the party at Ibiza will be even more awesome. *keeping fingers crossed*