I am a bit of a petrol head, in my drive way is an MR2 turbo, an old two seater that looks pretty decent, drives pretty fast, and basically as practical as a speedy bicycle with a basket. While I love my MR2, I had always wanted a Lotus, the little car maker that is incredibly, owned by Proton, and produces cars that can only be described as sex on wheels.

So when I was invited to join the Shell Helix Invasion Tour to Johor Bahru driving a Lotus, I jumped on the opportunity straight away.

Before you continue reading, for those who are the fan of TL;DR, may I suggest viewing this video that I spent half an hour creating?

some of the supercars that participated in the tour

I felt like kids in a candy store, and Haze found a lot of sketching subjects. 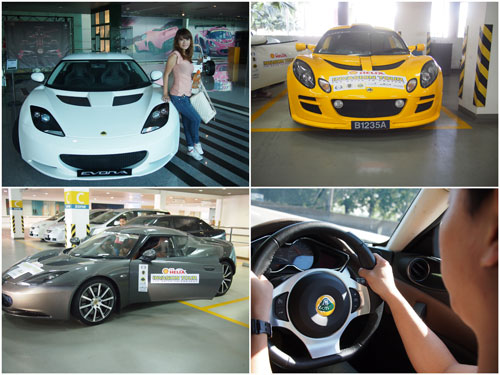 Lotus, the “almost” affordable dream car of mine. Evora, Exige

Our ride was the Lotus Evora – a mid engine sports car with 3.5 Liter V6 motor churning a respectable 280 PS. It had a 6 speed IPS automatic and is capable of launching from 0-100 in 4.9 seconds with a top speed of 260 km/h.This car gets it done with a perfect balance of grace and power, it was at the same time very comfortable and luxurious.

The stereo system is respectable, interior trimming simplistic yet elegant, and getting in and out doesn’t require you to be a gymnast (like an Elise or Exige would).

It is also the only Lotus with 2+2 configuration (though the rear seats are only good enough if you’re around Audrey’s size, but it sure was handy as luggage space).

Thank you Lotus Malaysia for loaning this car. 😀 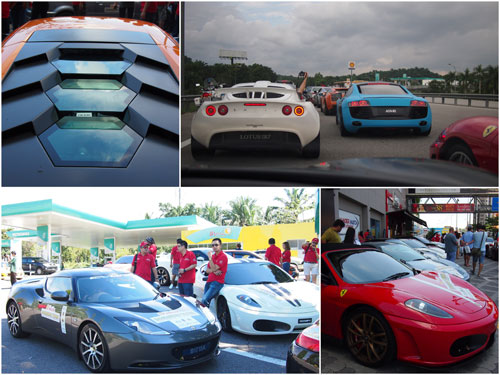 the first stop was Melacca

So off we went on the North South highway with the help of police escort service (I last had this at BMW drive, it was a godsend).

A moment later (yes, a moment later), we reached our first stop at Ayer Keroh Shell station for a fuel refill. It was a chance to allow my heart to slow down a little bit from pumping too fast driving the Evora. That was because the convoy wasn’t exactly slow moving, I had to be on my toes to keep up.

We then stopped by Movida at Hatten Square in Melaka from lunch. With all these cars parked right outside the mall, we managed to draw quite a crowd of passerby eager to snap photos. 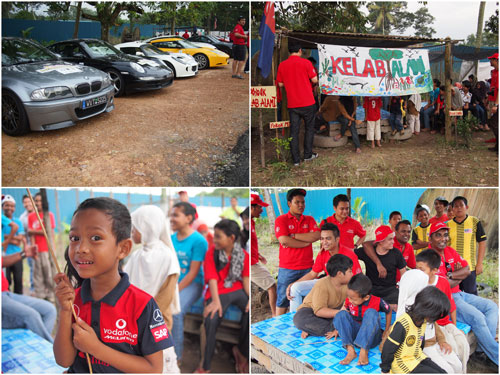 After lunch and a bit of chillax at Movida, the convoy went South Bound again.

Our next meeting point was Gelang Patah R&R, but due to a bit of confusion, the group somehow got split into 3, and we were among one of the groups that went into Gelang Patah town and got lost. An hour or so later, however, we managed to regroup, refuel, and head to the most important destination of the trip – Kelab Alami at Tanjung Kupang with the help of police escort.

13 different kids giving us a proper class on nature itself

Formed in 2009 by Cikgu Bakhtiar Jaffar, Kelab Alami is a centre for youth development first created with the help of Shell Malaysia Sustainable Development Grants Programme 2009. The club is an outlet for (mostly poor) kids around the area to learn about environment awareness and to study the ecosystem around the Singapore Strait and Sungai Pulai.

Over a dozen kids at the club took turn to educate us about the geography as well as the flora and fauna of the area – from the various sea grass species to dugong (manatee) to shell fish. It was amazing to see rural kids being empowered and given chance to participate in something like this, not to mention that we got quite a bit of a lesson ourselves.

We were going to take the kids for a ride in the cars, but unfortunately it started pouring, gahhh. We had to jet off after the presentation by the kids. 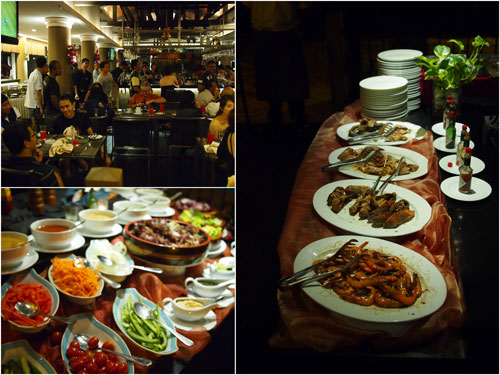 the BBQ buffet dinner at Thistle JB was delicious

Part of the convoy stayed at Thistle Hotel with some of us placed at Mutiara Hotel, but we had dinner as a group at Thistle.

Their BBQ buffet dinner was fantastic, the grilled lobsters and other seafood were much appreciated after a long day’s hard work (yeah right).

Many participants headed to The Zon for after dinner party, but Haze and I decided to head back to the hotel for an earlier snooze instead. We were pretty tired thanks to a few days of sleep deprivation (she was rushing for a Paint Lust project). 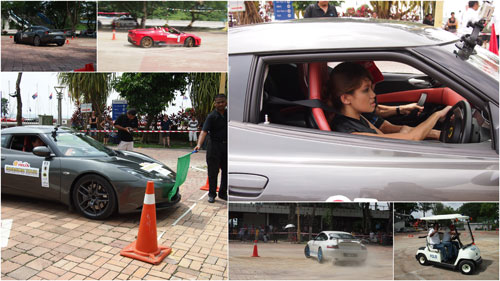 a mini autocross session with the Evora & other cars participanting

The next morning, we head to Danga Bay for a mini autocross competition. A manual Evora was fitted with less grippy tires for the purpose.

We were given a couple demo runs by Lotus Malaysia’s Ong Kah Beng, and then off we went taking turns on the course. While not the first time witnessing these type of events, I popped my virginity in Autocross this time, and I did it with style by going on the completely wrong route on my first trial. 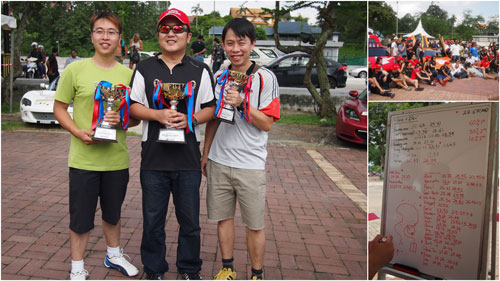 Thankfully, I somehow managed to improved my time on the subsequent runs and came in 3rd place among the media members (only 6 of us particpated, hehe). In the photo above, I was trying to not looked completely embarrassed.

After that, we made our way home and surrendered the car to Lotus Malaysia at Proton Centre of Excellent with a heavy heart. I will miss the Evora, and damn it I really want an Elise now.

Thank you Kong, Shell Helix, Zero To Hundred, and Lotus Malaysia for this opportunity.

To JB & Back in a Lotus Evora

Jackson's burger at PJ seksyen 14, still one of th

The floral and fruity flavor of Dilmah Earl Grey p

Two at Penang, one Ipoh, then straight to Selangor

A short 3D2N staycation for us at @hrhdesarucoast,

Found one of the best chasiu at a wantan mee stall