Kuta is one of the de-facto touristy areas that most who goes to the island of Bali will visit. It is a sort of a bigger version of Batu Feringghi in Penang, with more tourists, more stalls, more activities, and bigger waves.

Not coincidentally, this was also the ground zero of Bali bombing that happened in 2002, though there seems to be no lingering effects from that tragic incident 9 years ago so far as the tourism industry goes. 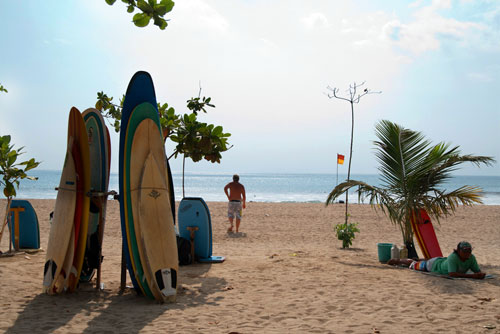 surfing lessons are offered at every 10 meter on the beach

Other than sun bathing and looking good in your bikini, one of the more popular activities on Kuta beach is surfing and wake boarding. You can easily get a surfing lesson from eager locals who almost looked Hawaiian, minus the accent.

We did not bother doing it, the wave wasn’t particularly big that day, and even if I managed to master the trade, then what? Your mileage may vary.

We stayed at Pendawa Hotel for a night at Kuta. It’s a 2 star place that is not too hard on the wallet at USD $46.75 via Agoda.

The room is air conditioned, uncarpeted, clean, and has a balcony facing the tastefully shaped swimming pool. The toilet, however, came with a bath tub that is already slightly stained. Not exactly awesome, but hey, it was less than USD $50.

street arts, not sure if those three are admirers

The hotel is located inside an alley directly opposite Discovery Mall, which is situated right by the beach. The mall has your typical KFC, Pizza Hut, and even Roti Boy. Yes, Roti Boy!

The alley is only as wide as a car, and wears plenty of rather tasteful graffitis (no huge cock or ahlong stickers, thankfully)

obligatory picture of myself by Kuta beach

Before heading to the beach, we actually spent a few hours at Waterbom Park. It was loads of fun actually, but there will be another post complete with GoPro videos dedicated just for it. As soon as Haze gets the video done, that is.

I snapped the photos above without knowing what actually happened. It looked like some sort of religious rituals at the time, with groups of people gathering, and some open burning going on.

Only later I found out (from a local) that these were actually cremation process, strangely, there seems to be no one crying. If this was a Chinese thing, there’d be plenty of drama (even if we have to fake it) 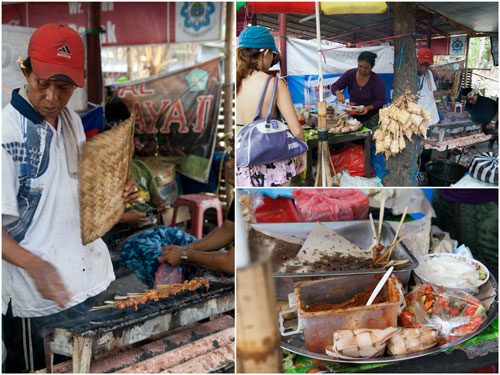 Our first meal at Bali was from this satey stall by Kuta Beach, hotel breakfast notwithstanding. We had to wait for a good 15-20 minutes before it was our turn, business was brisk at this little stall operated by a pair of old couple. 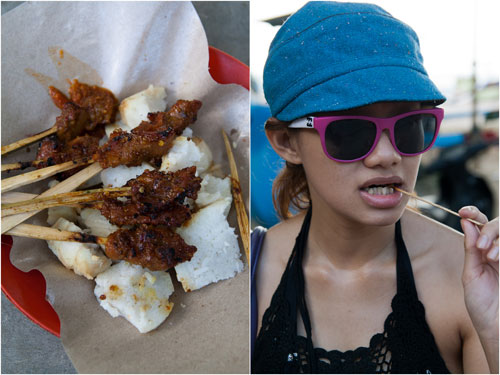 yes, it was yummy

The chicken satay comes with quite a bit of ketupat, but instead of peanut sauce that we’re familiar with, there is a type of pretty spicy sambal as condiment instead. It was plenty tasty, and cost us 10,000 Rupiah if I remember correctly.

There were plenty of hair braiding, padi-manicure, and temporary tattoo services along the beach. Haze did hers for 50k IDR. Initial asking price was 100k IDR, but in Bali you have to bargain for everything, and we probably could have gotten it even cheaper if patience is one of my traits.

The lady worked expertly on her hair, and the whole thing only took some 15-20 minutes.

we don’t take lotsa picture together, but when we do, it’s with pink sunnies

Now with the camera and her braided hair, we looked properly touristy. This is a recipe to get slaughtered, but you only travel so often, so what the heck.

bakso, tastes only as “good” as it looked

Near the art market by Kuta Beach, we found a stall operated by a guy with lousy hairstyle selling bakso – one of the so called must-eat street foods in Bali.

As we looked plenty touristy now, the bowl of bakso cost us 20k IDR, though you shouldn’t really pay more than 10k IDR or a bowl of meatballs, meat paste, crackers, and vermicelli noodle in soup. It didn’t taste as good as I thought it would be. I’d prefer it to be a bit less starchy and with more meat in those paste/ball. 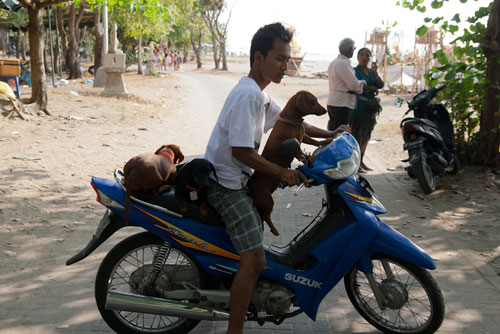 this is how you transport 3 dogs on a motorcycle

On the way back to the hotel, we also saw this pretty impressive feat – just a guy going on a motorcycle ride with his 3 sausage dogs, the puppies were basically just holding on to dear life while the guy trolls around on his Suzuki.

Yes, these are things you see at Kuta.

KY travels – Street foods and such at Kuta beach, Bali

20 thoughts on “KY travels – Street foods and such at Kuta beach, Bali”

Aqua Planet Jeju, one of the must-visit point of i

Black pigs is one of the specialty of Jeju Island,

This was how we ordered at a place named Bujeon re