Last Friday we braved the traffic and traveled to Solaris Mont Kiara for a lovely dinner at Shuraku thanks to the invitation from Mei.

The quaint Japanese restaurant is located just above Maybank on level 2, with the ambiance that is only made possible by the inclusion of Japanese diners in addition to Japanese magazines, old clocks, hanging ropes, and the sound and smell of a yakitori bar.

The dishes for the night were already chosen for us so the six of us just sat back and relax. We started the night with some Asahi beer and a couple glasses of Japanese cocktails that were served from this portable carbonated dispenser, we had a pear flavored cocktail, it was lovely.

Appetizer, if you would, were seared salmon on tamago (sweet egg omelet), the sweet and savory unagi on tofu, and some tasty beef steak salad.

What we really came here for though, were the yakitori. While yakitori literally meant grilled fowl, at Shuraku, they also serve it with yummy pork belly too.

Of course, we also had  chicken thigh with leek, chicken wings (I must say the way Japanese grill their chicken wings is a lot better than our Malaysian style, much easier to eat and much less messy), and my favorite – chicken gizzards.

Soba salad was refreshing but slightly awkward, I still prefer the good old cha soba, this is a bit too fusion for me.

The roast eggplants however, was super awesome. There’s a type of sweet (peanut/mayo?) sauce they add to it that made it so rich and really made my taste buds happy. Kim and I devoured the whole thing, including skin! 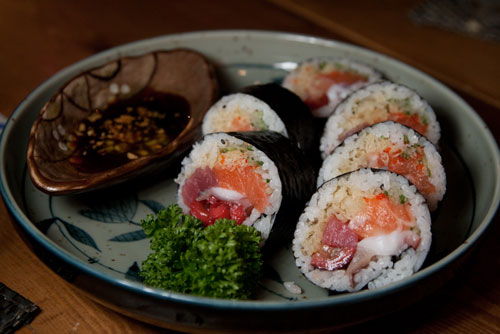 We shared a salmon and tuna maki too, so yah, they do have raw fish and do a very fine job preparing the maki. Great in both presentation and taste, I must say.

Curiously, Shuraku also serve up a pretty good kimchi dish, and with pork belly in it of course.

Okonomiyaki was rich and quite filling with all the mayo and sweet sauce, I just realised last I had this was in 2005, documented in this post, at Lowyat plaza.

Ah, there’s also this meatball skewer that was served with half boiled egg. Interesting combination that somehow worked.

We ordered several more yakitori of various flavored and had an awesome night. Prices at Shuraku are reasonable and doesn’t vary much from other similar Japanese outfit. Do check the place out if you love authentic Japanese food that isn’t just confined to sushi and sashimi

A pretty special lunch at Maple Palace in Georgeto

It's titab in Kelantan but this stall at Tasik Sek

Ding Xianf Sang Nyuk Noodle at ss15, to be honest

Soon Wah at Taman Berkeley, come for the watermelo