I’ve  heard of Restaurant Ahwa and it’s famous Hokkien Mee (not prawn mee) for a long time. However, for some reasons it took me years to finally go there despite staying only some 2 kilometers away.

What followed was a second visit just days after the first, the reputation for this place is indeed well deserved.

Restaurant Ahwa is located just next to the Shell gas station on Jalan 222, just a short turning from Federal Highway Jalan 222 exit. Parking is usually not a very trying affair as there is only a single row of shops where the restaurant is located. Looking for a place to sit though, might prove to be slightly harder as the restaurant is rather busy.

On the first visit, horng and I ordered hokkien mee for two and we added a plate of loh bak for good measures.

The Hokkein Mee (RM 12 for 2) was rather good. Dark, rich, and of course, with bits of fried pork lad. I would say this place is on par with the other famous Hokkien Mee stall at Chow Yang. It did not disappoint despite the fact that KL style Hokkien Mee isn’t exactly my favorite hawker foods.

The loh bak was pretty satisfactory, but we’ve had better prawn fritters though, (the one outside Pudu Plaza comes to mind).

pickled green chili and red chili paste for the taking

On my second visit with Kerol, we ordered Wat Tan Hor (RM 12 for 2, flat noodle with egg gravy) for two with a plate of lala and a couple deep fried chicken wings as appetizers.

Perhaps it’s a personal taste, but I do like their wat tan hor more than the hokkien mee this place is famous for. The gravy was thick and savory, the flat noodle flavorful. 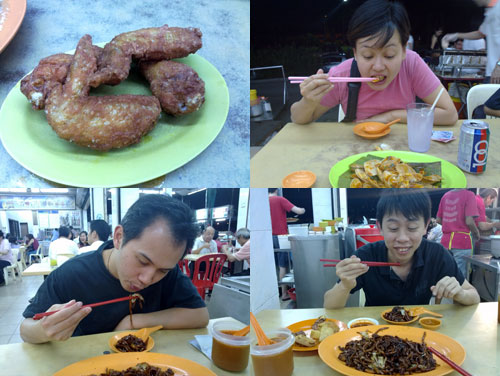 The lala (RM 11) too were juicy and spicy, which makes it a perfect appetizer. I wish we had ordered a bigger serving though. As for the chicken wings, they were decent enough as normal deep fried belacan marinated chicken wings, but not something to shout about since I still think mom makes the best belacan chicken wings on the surface of the earth.

On both occasions though, we ended up pretty satisfied while not exactly having to scotch the wallet for a sumptuous no nonsense KL hawker food. I shall return to this kopitiam again and again. 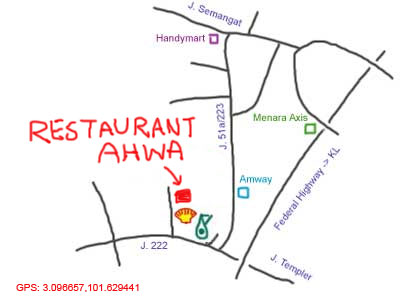