The following research on ASIMO is engaged by Honda Advanced Technology

Honda is generally associated as a company that produces cars and motorcycles. In a departure to traditional wheeled vehicles, Honda also pursuit in researching more radical mobility technology. The result is ASIMO, Honda’s Advanced Mobility Technology.

The concept behind Honda’s robot R&D was to create a viable mobility technology that allows robot to live with and help human kind. With two-legged walking capability, the robot would be free from purpose built roads and be able to maneuver with human. This includes circumventing objects, going up and down stairs, and walking on uneven roads. The ultimate objective is, of course, to allow the robot to live in a human home and not confined to purpose built environments.

Contrary to popular misconception, ASIMO is not a reference to popular science fiction writer and the inventor of the Three Laws of Robotics, Issac Asimov, but an acronym for “Advanced Step in Innovative Mobility” 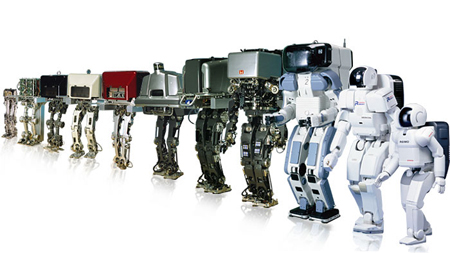 the whole lineup, from experimental models to the new ASIMO

The first version of ASIMO was unveiled in 2000 following a slew of experimental models developed by Honda started from the 1986. The first seven models (E0 to E6) were basically just walking legs, three other humanoid robots with upper limbs were developed from 1993 to 1997 before ASIMO was launched. Almost a quarter century of dedicated development.

The current version of ASIMO, first unveiled in 2005, has seen numerous improvement over the previous version. The robot can walk at a leisure speed of 2.7 km/hour, and for the first time, run at 6 km/hour. ASIMO can also do what most other things human is capable of, this includes recognizing people’s face and interact with them via its head-mounted camera, maneuver around obstructions, as well as dance in tune with music.

By being programmed and operated wirelessly, ASIMO can perform a number of tasks including fetching coffee, walking hand-in-hand with a human, and even conducting a symphony ochestra.

ASIMO runs on Lithium Ion battery with a continuous operating time of 40 minutes to 1 hour. The robot will automatically identify and walk to the closest charging station when its remaining battery level falls below a certain level. This ensures that there isn’t any human intervention needed to recharge the robot.

Honda’s commitment to continue development of ASIMO and its advanced mobility technology will only mean that the robot will one day take an active role in fulfilling serious functions in society. It may serve as another set of eyes, ears, hands, and legs for all kinds of people in need.

Hopefully soon enough, we will all have an ASIMO or equivalent serving as the helper at home instead of having to hire foreign maids like we do now.

For more information, you can visit Honda Advanced Technology

This was how we ordered at a place named Bujeon re

An Viet has a pretty cool yee sang game for sure,

Makan kitchen at the latest Double Tree by Hilton