A couple weeks ago I went back to Penang for a short stay, while I usually take every chance possible to catch up with Penang street foods, this time I decided to try something slightly different by going to the Hainanese Delights restaurant within 1926 Heritage Hotel on Burma Road (where I also spent the night, but that’ll be on another post)

The restaurant is actually operated by my friend’s dad since about 4-5 years ago. A true blue Hainanese family who follows the traditional recipes of the forefathers.

For the four of us, we started out with the chicken curry kapitan (RM 15) with some “Bengali roti”, the traditional Indian bread that’s has a crispy brown crust but super fluffy inside. The chicken peels off the bones easily, and the curry kapitan carries an intense flavor that goes very well with the equally fragrant bread, I can imagine having this as a great breakfast.

Penang lorbak, or lohbak (RM 5.50 per roll) is usually made with pork, but as this is a pork free restaurant, they substitute it with chicken. I must admit that I had my doubts at first, but they’ve really done a fine job with the poultry and the result is a version of lorbak that live up to the reputation.

The spring roll (RM 5.50 per roll) here is another one of their best sellers, stuffed with crab meat and other ingredients. Dipping it with their specially mixed lea & perrins sauce that carries a hint of mustard resulting in a pretty complex and rather delicious appetiser that’s unlike your normal run off the mill spring rolls. This is something I’ll definitely order again.

Braised lamb with lady’s fingers (RM 20) consists of 5 slabs of tender New Zealand lamb covered in brown sauce that goes perfectly with those steamed okra. You can have it with some steamed rice, or perhaps, beer?

Assam prawns (RM 7.00 each, min 4) is more of a Nyonya dish than Hainanese (I cooked this too), but the chef did a fine job preparing this dish, though I thought it would be great if they serve it with some sambal.

Lastly, we also tried the Hainanese fried mee (RM 8.90) from the kitchen. A dish that can definitely stand on its own with a combination of vegetables, chicken, prawns, and a side of sambal with a kick.

These were just a small sample of what is offered at Hainanese Delights, other dishes include lobster thermidor, crab mornay, Hainanese mushroom soup, inchee kay bin, yam duck, lamb stew, lamb curry, and of course, their pretty famous Hainanese chicken rice (which I had to forgo trying due to schedule). I’m going to bring mom here next time I’m back!

We ended the night with some cookies and cheese cakes made by WenQi. These are some really delicious cakes made with quality ingredients, and she is starting to sell them at the restaurant and on her own as well. Will update this space when that is ready!

Thank you WenQi and see you again!

While having an extended talk crap session after dinner on a Saturday night, Tim asked:
“Eh who wants to go to bak kut teh tomorrow? This place serves the best fu chuk ever! We go there early, lets meet at 8:45am!”

WWQ, Kim, Rachel and I signed up immediately despite the fact that it was already past midnight when the idea was brought up. Personally I’ve always been pretty impartial with fu chuk (fried bean curd sheet), but I’ll try anything that’s claimed to be good. 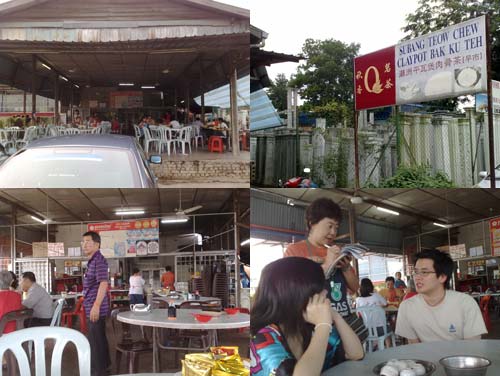 Since it’s a pretty well hidden place, we decided to go there in a single car. Kim didn’t turn up as she decided to let insomnia took over the previous night and was unable to operate even at her own level, so it was four of us. The place is actually a sort of wooden shack opposite ESSO petrol station by Jalan Sg. Buloh along the Guthrie Corridor. Coming from Shah Alam you’ll have to be careful not to end up on the highway but to take the ramp to Jalan Sg. Buloh instead.

the fu chuk deserves an entire clay pot by itself

We ordered a 3-person portion of bak kut teh and an clay pot of fu chuk. Despite being sleepy, Tim’s excitement was very visible while waiting for the fu chuk. I didn’t think he care much about anything else, he was a man with a mission.

The two clay pots didn’t take long to arrive. The bak kut teh meat and soup was as good as any other, tender well cooked meat with teow chew style bak kut teh soup that is a little less stronger tasting than the Klang version. It was actually pretty good.

True to Tim’s claim, the true fu chuk was really really good. Slightly crunchy with just the right texture, the taste was very good especially with the soup. I never had so much fu chuk in one serving, it actually reminds me of the high grade bean curd skin I had in Japan.

The meal, with steamed rice for four and a pot of tea costs us RM 37. Very good deal don’t you think? I know I’m going to head there again pretty soon. Open from 7am to 2:30pm daily, closes on Mondays.

KY saw – Chelsea vs Malaysia with some Fehmes Bloggers

Haaaaaa! I finally can say that I have watched an English premiership team in live, not very up close and rather impersonal, but it was Chelsea FC vs Malaysia XI live, and I was in the flesh! All thanks to Heineken for sponsoring the tickets via the little contest I ran on this blog(results here).

Audrey, Ringo, Wenqi, and Yours Truly

Well, we reached the stadium just as the game gets started. The atmosphere outside the stadium itself was already very exciting, with loud cheering sound coming from within the huge structure. We had a bit of a delay (an entire half actually) as some of us had to collect tickets from the super patient yee hou who was running around outside the stadium. It took that long mainly thanks to the total collapse of Maxis’ network under the huge load. SMS took over 15-20 minutes to get through, and I had zero luck trying to put a call through after trying for at least 50 times!

But the important thing was we got in eventually. The stadium was pretty packed at the section we were in, sea of blue with almost no one wearing a Malaysian jersey. I put on my one and only national football jersey albeit from a different country (but hey, Vietnam is in ASEAN as well, so..)

The game itself was pretty interesting, and we certainly enjoyed ourselves. Our boys did pretty decent (losing 0-2) and fared better than the other two teams that went up against Chelsea in their Asia Tour. The Star did a much better review of the game which I’m not going to repeat.

After the game we proceed to have a post-game gossip at McD in Subang. However, most of the gossips did not revolve around football at all. It was already past midnight when we called it a night.