A little while ago one of Haze’s aunt from Kepong, who is quite a foodie herself, introduced us to Restoran Penang Corner at Jalan Kepong Baru, just a stone’s throw away from the popular KTZ dessert store.

The restaurant is more like a road side food court with several stalls than an actual “restaurant” if you will. While there is a roof above you, the “walls” consists of iron grills. That being said, the whole set up is more than sufficient for its purpose, which is to serve authentic Penang style hawker fare.

I was here for the curry mee, and to be perfectly honest, while it is not as good as the version at Restoran Okay at SS2 or Sun Sea at OUG, it was still sorta decent.

There’s coagulated blood, the chili paste has a strong fragrant from fried shallots, and those cuttlefish and half-raw cockles were great. My only complain is that they replaced good old fashion prawn with meatballs. A bit of sacrilege I thought, otherwise a decent version.

Penang Hokkien mee, or popularly referred to as prawn mee

The prawn mee has a decent base, but yet again there is a bit of a mismatch in the ingredients served.

The soup, chili paste, fried shallots, bean sprout, pork, and eggs were on point, but I thought there should be kangkung instead of fish paste. There should be no fish paste in Hokkien mee. Throw away the fish paste and this is a decent bowl worthy of being called Penang prawn mee.

Then there’s the char kuih teow, and luckily over here they got the ingredients all right. There’s prawn, chives, cockles, bean sprouts, lap cheong, and even some lard. I actually quite enjoy the almost-raw cockles placed on top of the dish, if you want it more cooked, simply bake the cockles within the pile of kuih teow for an extra minute.

Over all I found the food in this place to be more than decent except for a few quirks which probably may not irk non Penangites much. I’ll be trying their kuih teow soup next time I’m there. 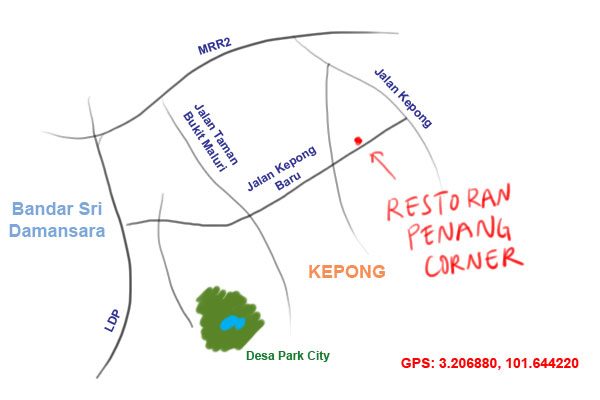 For many prawn mee and loh mee fans out there who used to frequent Choon prawn mee stall at O&S, here’s their new location just a few shops down the road.

Yeap, the stall at O&S is now taken over by another operator (reportedly not nearly as delicious), so if you want to get the familiar taste, here’s where you have to go. The new place is air conditioned, slightly more expensive, and much more comfortable compared to O&S.

In addition to prawn mee and loh mee (starting from RM 6.50) with all sorts of extra ingredients such as extra prawns, intestine, pig tail, ribs, and squid, the shop also offers other dishes such as kuih teow th’ng (yet to try), toast, nasi lemak, chee cheong fun, and so forth.

well satisfied with my breakfast of lor mee

For my visit, I went for my favorite – Penang loh mee.

For those who aren’t familiar with Penang version of lor mee, it is pretty similar to prawn mee, but in addition to prawn, bean sprout, fried shallot, and sliced pork, there’s usually half a hard boiled egg, minced garlic sauce, and of course, those thick startchy broth.

The version here is as good as any, and the extra RM 2 I paid for those intestine was well worth it. Now I feel like I want to have a bowl with all the extras!