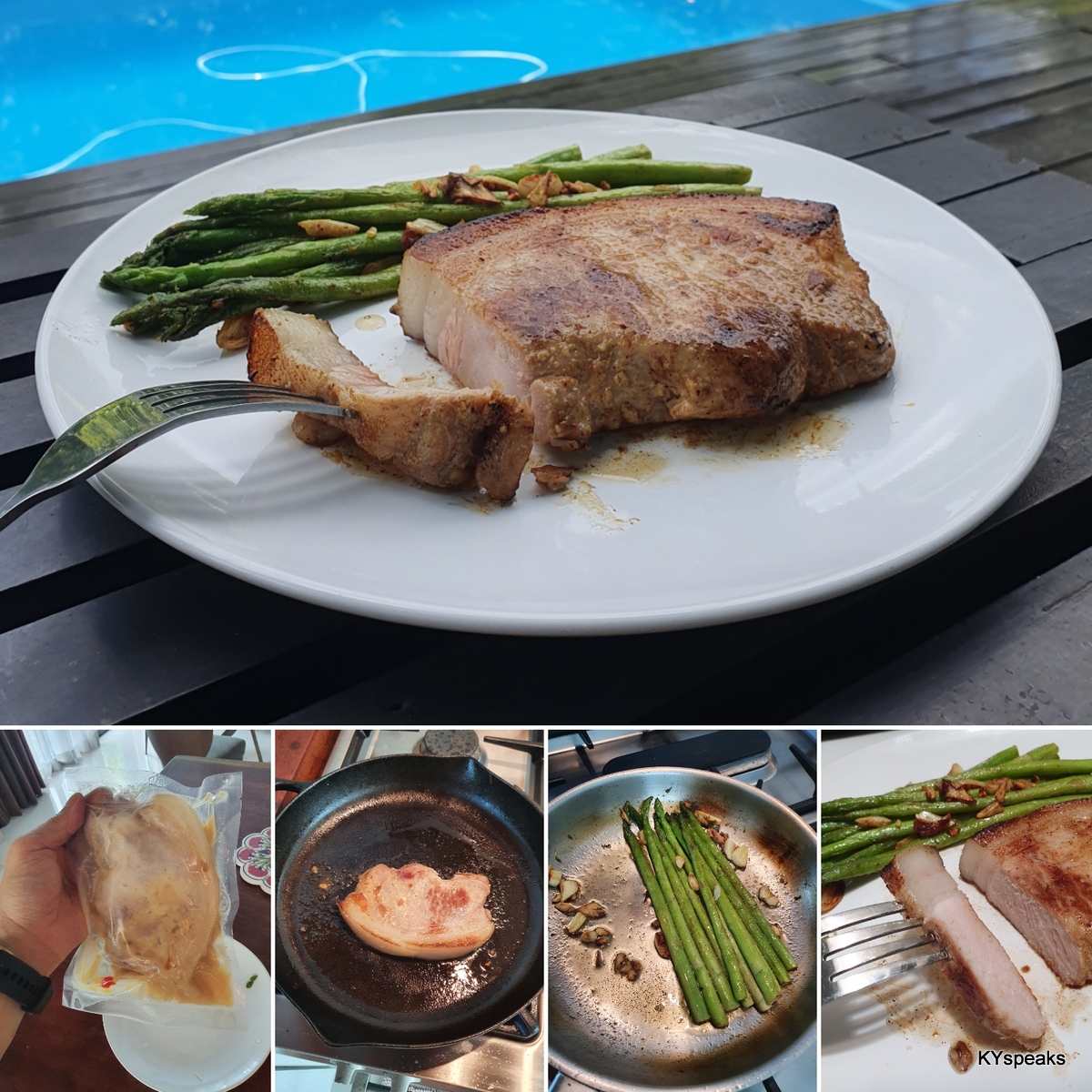 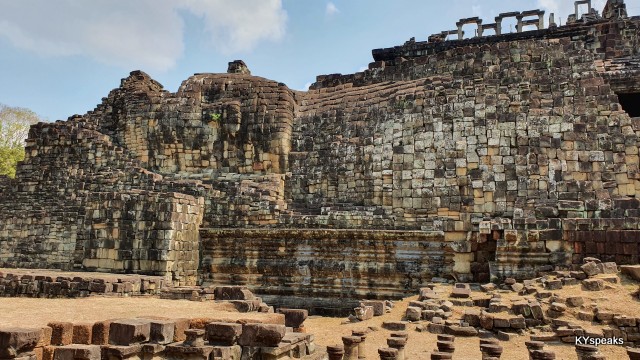 When it comes to food in Ipoh, the most famous of them all has got to be chicken rice with bean sprout, and for those who love this dish, there’s no other place that is more popular than Restoran Tauge Ayam Ong Kee right in the heart of Ipoh town, which was where we stopped by for lunch on New Year’s day. 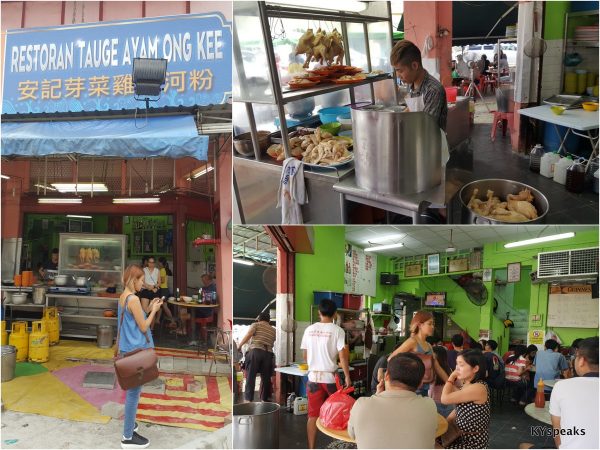 If you get to Ong Kee on weekends of during public holidays, getting there in itself can sometimes be a problem, and parking too can be quite a challenge. After all those, you may still end up spending a bit of time waiting for a vacant table. Though thankfully, food usually doesn’t take too long to be served, so there’s that. 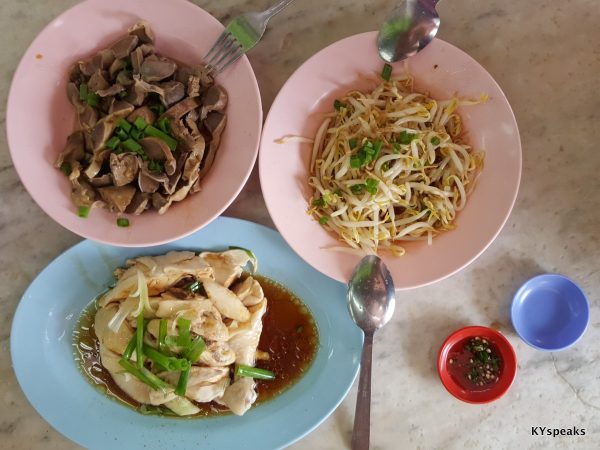 The menu choices are simple, there’s poached chicken, innards, bean sprouts, and there’s also pork balls should you want to indulge yourself in some non-avian meat.

Most popular eateries get the “used to be better” and “overrated” labels quite a bit, but honestly speaking I do find Ong Kee’s chicken right on par with expectations. They are tender, not overly complex, and soak in properly balanced cocktail of soya sauce. The bean sprouts too is of rather good quality, as with most bean sprouts from Ipoh, probably due to the water quality. 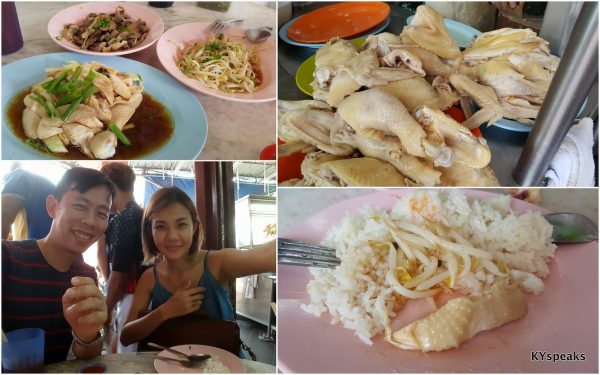 the amount of chicken they sell each day is astounding

Overall, lunch proved to be quite a satisfying affair, and at RM 36 including drinks, it was quite an affordable option as well. Happy eating! 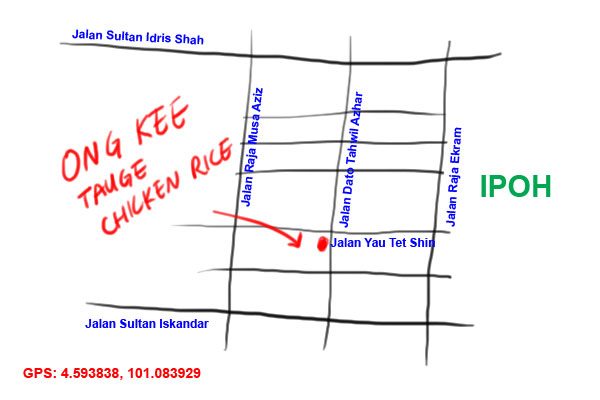 It is often said that art is essential in any civilisation, it tells us what our culture is, and defines the era that we live in. In Malaysia, we’ve seen the emergence of street arts in recent years, particularly in wall paintings and murals.

At Ipoh, OLDTOWN white coffee partners with renowned Lithuanian artist, Ernest Zacharevic to create the ‘Art of OLDTOWN’, who is painting murals to celebrate Ipoh, the birthplace of white coffee.

Like many Malaysian, coffee is pretty much essential to my life. It is the beverage of choice every morning (especially on working days), without a cup of good coffee I wouldn’t know how to start the day. 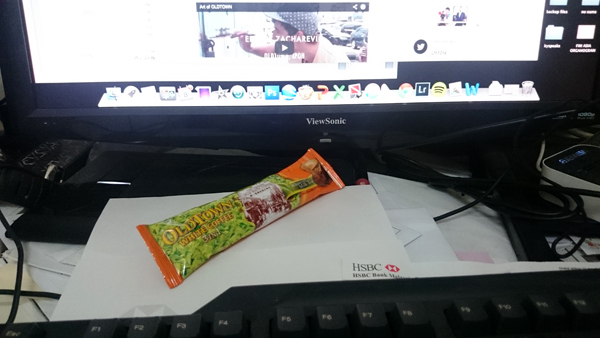 OLDTOWN 3in1 White Coffee within reach

One of the simplest and most convenient way to achieve this is by making myself a cup of OLDTOWN 3in1 white coffee.

I keep some at the office and at home for the time when I need a bit of a boost to continue working, with the only problem being that some of my colleagues tend to come asking for them from time to time. 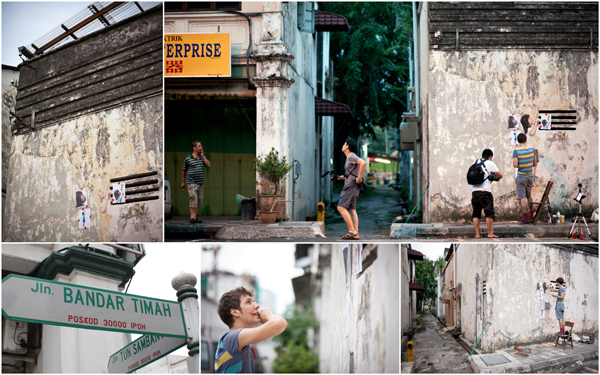 Anyway, back to the art project initiated by OLDTOWN at Ipoh.

The first piece was done at Jalan Bandar Timah by Ernest Zacharevic as a teaser back in April, the project will showcase seven different murals in Ipoh honoring this birthplace of white coffee. 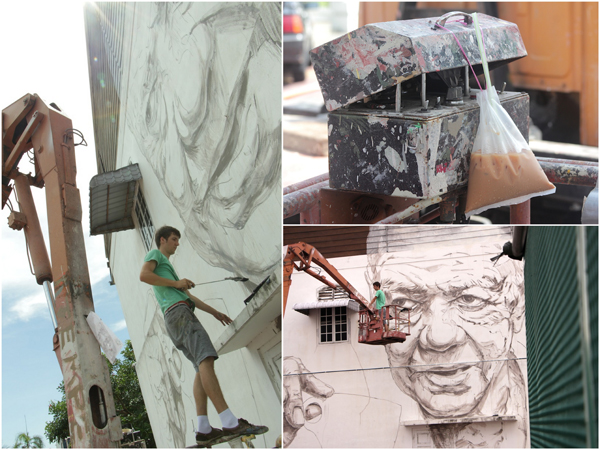 The artist expressed how he was amazed by people of Ipoh in the way they are humble yet proud of their hometown, and how he is touched and inspired by the local architecture, culture, food, and people. He also mentioned that it was an honor to work with OLDTOWN, who’s grown successful and yet never neglect its root, heritage, and the people who helped it succeed. 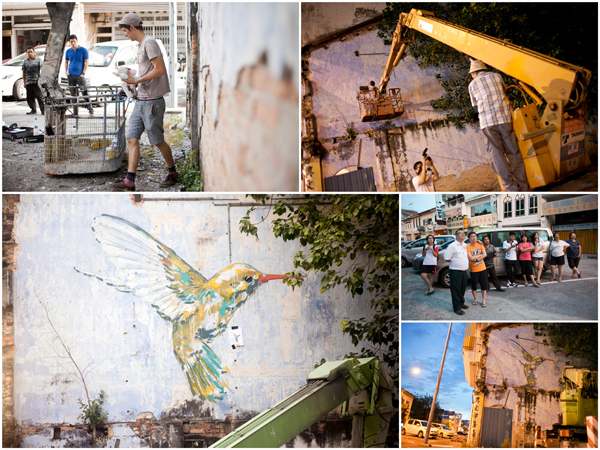 Do check out the ‘Art of OLDTOWN’ journey at facebook.com/OldTownWhiteCoffeeMalaysia or follow them at Twitter at @OldTown_WCoffee for the latest update of this project, starting 26 May 2014 until 26 June 2014.

In the mean time, I’m going to make me a cup of 3in1 white coffee.

While on the way to Penang for Cheng Meng last week, we stopped by Ipoh for a quick dinner. The choice of noms for the night was the famous Menglembu Honey Chicken.

While I’ve had the honey chicken wings many times (usually tapao by Horng) The last time I visited this place was at some 10 years ago, and instead of that little small hawker stand, it is now a whole shop by itself, with ample workers to cater for their booming business. 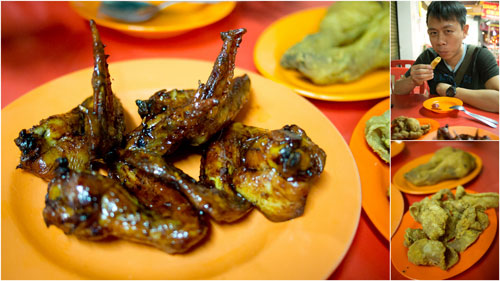 the best honey chicken wings there is

We ordered a 2 pairs of honey chicken wings, 2 fried drumsticks, and a plate of deep fried chicken skin to share.

The honey chicken was as good as remembered. Sweet, succulent, and sticky in a good way. The meat gets torn off the bones so easily you can feed this to someone toothless. Chicken skin too would make very good beer food.

As for the deep fried drumsticks though, they were very ordinary, and play second fiddle to my favorite KFC.

If you’re willing to detour a little on a late evening drive between Penang and KL, do stop by this place and get some honey chicken. I assure you the extra 10km drive is worth it. 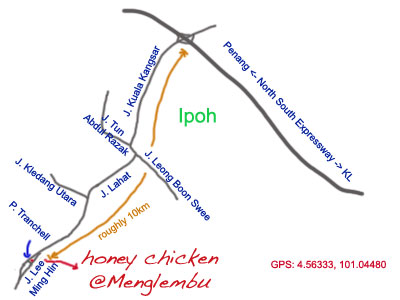 When it comes to dimsum, Ming Court Hong Kong Tim Sum restaurant at Ipoh is gotta be one of my all time favorites. I always try to make it a point to stop by Ming Court whenever I drive between KL and Penang in the mornings.

For evening commute, I sometimes head to Pun Chun for wantan mee and chicken biscuits instead. 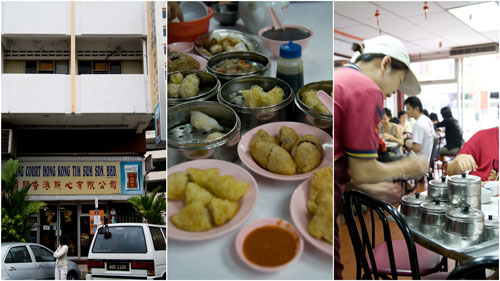 The restaurant is located at the heart of Ipoh city in an unsuspecting shop lot, opposite another dimsum behemoth that is Fu Shan. While some swore by Fu Shan, I personally had the experience of rather disappointing meal there, hence I stick to this old school outlet these days. (the reason why I don’t blog about Fu Shan).

Parking can be a bit challenging, but there’re private car parks nearby. Like Hong Kong, sharing table is pretty much obligated here due to the volume of customer. 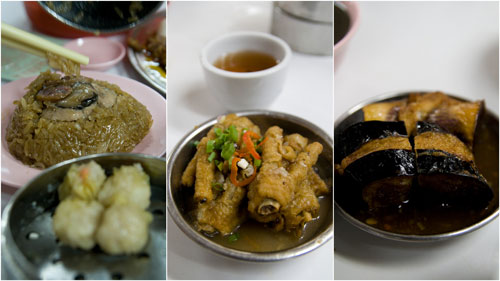 The glutinous rice with chicken, braised phoenix claws (chicken feet lah!), stuffed eggplants, and of course, the usual hargao (prawn dimsum) and siumai (pork dimsum) are must orders. The portions are slightly smaller than those found in KL, but packed a bigger punch in flavors. 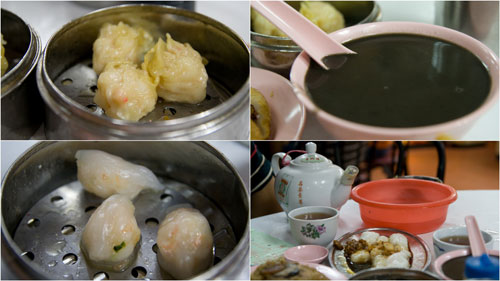 One of the must-order signature dish at Ming Court is their black sesame soup. While the black colored soup might look a bit like diluted mud from the photo, the combination of it’s smell and taste really blew me away when I had this. It was  rich yet really smooth, there’s no “jelak” feeling afer consuming the whole bowl either. 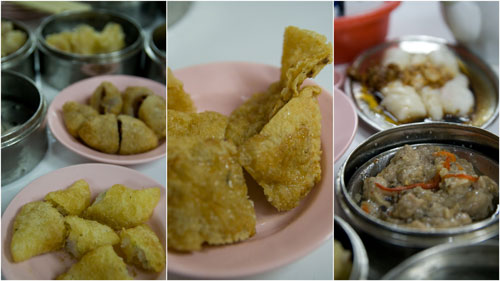 Other than traditional steamed dimsum, there’s a wide variety of deep fried dishes too. I’ve tried their prawns with mayonnaise, wu kok, and quite a few other items completely foreign to me. They all tasted pretty awesome.

Their chee cheong fun and pork ribs were A-OK too. 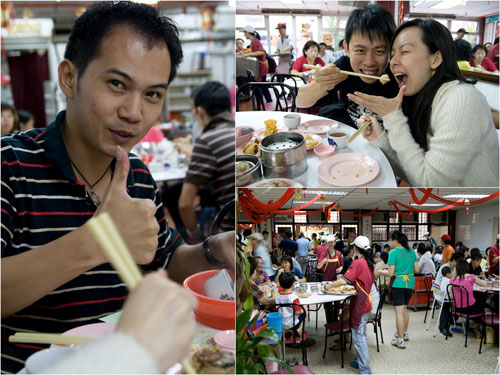 The dimsum here are priced between RM 2.00 to RM 2.80 with a couple items at RM 4.00. We usually spend slightly more than RM 10 per person for an awesomely satisfying brunch. 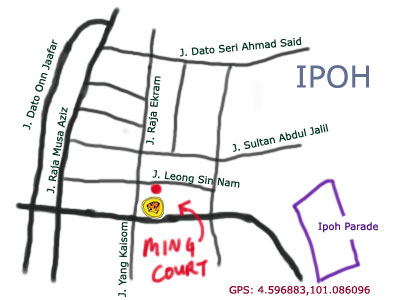 What’s better than an ice cold beer? A frozen beer of course!

I’ve heard about this wonderful concoction from Gareth several years ago, so when Cheesie, Kim, Jojo, and I were shooting Project Alpha season 2 at Lost World of Tambun, we made it a point to have dinner there. 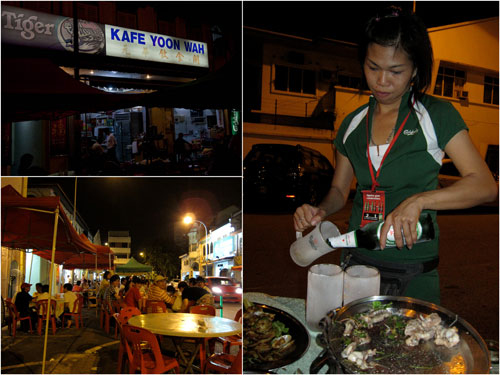 After spending a good 20-30 minutes looking for the place and almost ended up at a wrong shop with a deceptively similar name, we finally sat our collective butts on the table. Except this time around the 5 of us sat at a semi-circle aka TVB style dinner, and I got to do the food review in the video below:

Before talking about the food, lets concentrate on the frozen beer for a moment. The idea is actually pretty simple, the beer is chilled till it’s almost frozen, I’m guessing probably below 4 C.

The beer glasses are super chilled separately, and when the two meets, the beer foam is instantly frozen, and the beer itself remained super cold but in liquid form. The beer tasted super awesome! I’m not sure you can do this at home, but I think it’s worth a try, just don’t leave your beer in the freezer though. 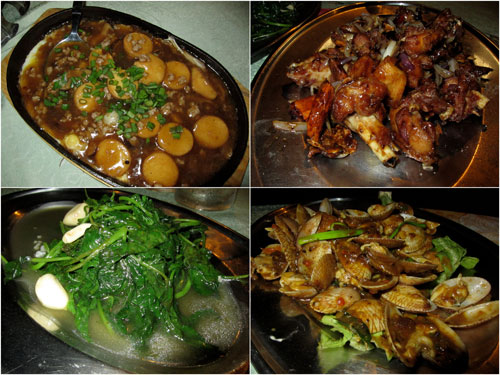 Since the shop uses a super cool and ultra efficient wireless PDA for ordering, we ended up asking for way too much food. The five of us had 7 dishes, and later added on 2 other side dishes since we found out Jojo doesn’t eat seafood, at all! 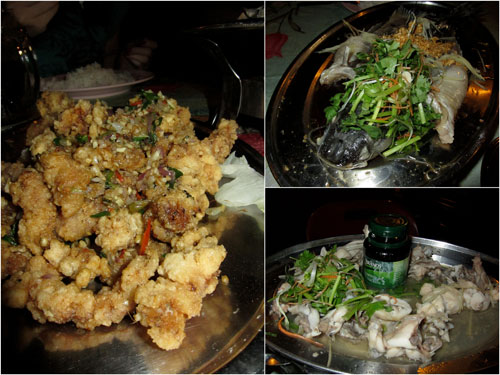 Other than the fish which tasted rather ordinary, the other 3 dishes were excellent. The mantis prawns was my favorite, deep fried, salted, and with fresh chili all over, it packed a punch and was really flavorful. The steamed frog with chicken essence were very sweet too, Kim loved that max! 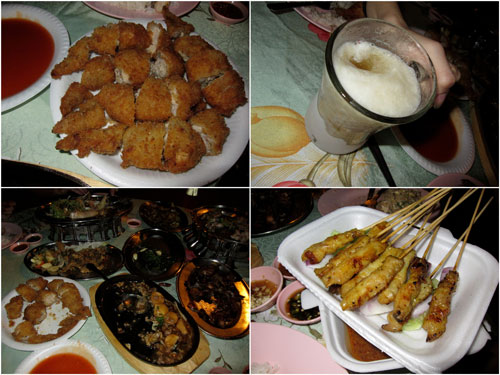 Since Jojo were only able to have 3 out of those 7 dishes, we ordered stuffed chicken wings and satay for the tv celeb without telling her that the wings are stuffed with a variety of ingredients including mutton and fish. We liked it, and so did Jojo, but she almost killed me when I told her they had fish in them.

The stuffed wings are a must order item, and it’s sold by this old lady that has a stall next to Yoon Wah. Don’t miss out if you’re there. The satay though, was forgettable.

Since this was for Project Alpha, the production treated us dinner and I didn’t manage to find out the exact price of the feast. But from all the other blogs and comments, Yoon Wah seems to charge pretty reasonably. So if you’re in Ipoh, get some frozen beer and good seafood there. 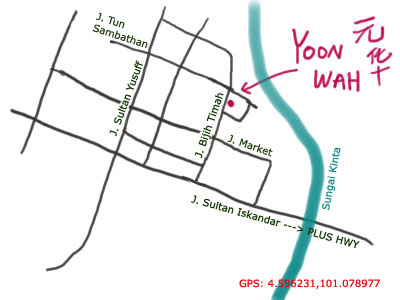 Check out our other Project Alpha season 2 videos too!
Ep 26 – Musing around at Lost world of Tambun