Koay Chap is one of the lesser known Penang hakwer food, and I would guess that the reason is probably due to the amount of work needed in preparing the dish. The ingredient of koay chap includes duck meat, duck innards, duck egg, coagulated blood, some of which aren’t as easily available as others.

There are only a handful of koay chap stalls in Penang, and perhaps the most popular among them is the one by Kimberly Street in Georgetown that operates in the evenings till late (just by the chicken feet stall). You can’t miss this place, it is almost always packed with tourists and locals alike, with huge amount of ingredients proudly displayed out in the open. Makes one think how many bowls are moved each night.

While back for Horng & Yuki’s wedding, David and I took a short walk from Komtar to this stall just as the sun was starting to set and got us each a bowl of this good stuff as a pre-dinner tummy liner, and it was absolutely satisfying.

You can have the koay chap with traditional thick flat noodle (quite close to mee hun kuih), or with rice. Can’t go wrong either way.

A couple weeks ago I was invited to yet another event hosted by Glenlivet at Truefitt & Hill, the oldest barbershop in the world. The event unveiled the Glenlivet Guardians’ Chapter, and we got ourselves a proper hair cut as well.

Truefitt and Hill at Starhill Gallery

The Glenlivet Guardians’ Chapter is a whisky voted by thousands of whisky lovers across 37 different countries from the three expressions hand picked by Master Distiller Alan Winchester. The Exotic edged out Classic and Revival to be among The Glenlivet’s limited edition single malt releases. 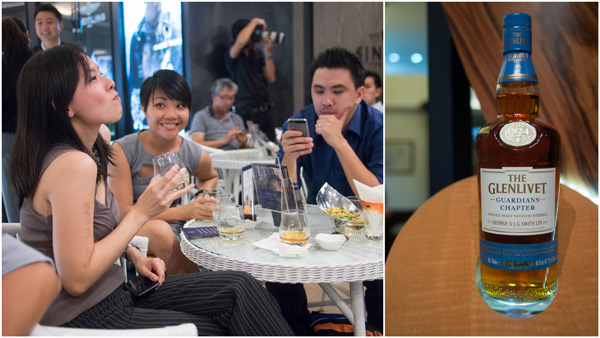 The whisky has an aromas rich with marmalade and fruitcake, while the palate tantalises with dark chocolate, hints of zesty orange and finishes long and slightly dry. I find it pretty easy to drink, not being overly dry or having an overly strong finish.

some tasty canapes to go with the single malt whisky

To get your hands on a bottle of the Guardians’ Chapter, you have to be either a Glenlivet Guardian, or purchase one at selected travel retails (ie: airports) at RM 398 per bottle.

We sampled the Guardians’ Chapter with some canapes while waiting for our turn for what turned out to be a pretty interesting experience – a Royal Haircut at Truefitt and Hill.

getting my Royal Haircut experience at Truefitt and Hill

Truefitt and Hill is recognised by The Guinness World Record as the oldest barber in the world with the history tracing back in fashionable Mayfair in 1805. They have four branches in Malaysia, and also perhaps the only barber chain that offer services only to men.

the boys with our new haircut

The experience was the most unique I had in a saloon/barber shop. The entire process for the Royal Haircut (RM 95) took some 30-45 minutes. Through the whole thing I never needed to get off my chair, and left with not a single strand of hair on my shirt either.

I quite like my new haircut that was styled in accordance to the occasion, what say you? 😀

KY eats – Lord of the Ribs at Checkers, Damansara Heights

I’ve heard about Checkers for a while and always wanted to try their famous pork ribs, years after I was first recommended by a friend about this place, we finally went there for dinner over Pearl’s (belated) birthday.

Checkers at Damasara Heights, there isn’t a sign board

Located at a pretty quiet part of Damansara Heights with ample parking space, Checkers is very small family run restaurant that gives you the homey ambiance with the stern looking proprietor and his friendly wife. Most everyone that shared the other 5-6 tables in the dining hall seemed to know the owners on first name basis.

Equipped with plastic chairs and basic white table cloths on square dining tables, interior decoration at Checkers were probably done in 5 minutes. In fact, the restaurant doesn’t even have a sign board. But we’re here for food, right?

village bread, served with a side of sliced tomato & salami

Menu is a simple one page A4 sheet with choices of pasta, appetizers, grilled meat, and a few types of desserts. There are also usually some off-menu dishes you could order, all you need to do is ask.

We started the night with an order of village bread (off menu) and it turned out to be surprisingly good. The bread was steaming hot and served with a side of sliced tomato and salami as well as olive oil and vinegar. Perfect to munch on while waiting for the main attraction. The bread might look deceptively small in portion, but it’s good enough to serve a table of four.

Lord of the Ribs, the main attraction

The aptly named Lord of the Ribs (RM 120) is what we came here for. A giant slab of pork ribs expertly seasoned and grilled with perfection. While the exterior looks a bit dry, it was prepared so to seal in the juices within. Home made bbq sauce (I think), and an olive oil based sauce comes with it. While some have complained about the ribs being a little dry, I thought it was lovely and not over powered by too much sauce (then all you taste is sauce instead of meat).

The dish also came with generous portion of salad and mash, if there’s only two of you, this slab of ribs should be the only thing you order.

We also shared a chicken pasta dish (off menu, can’t remember the exact name) which could have been lovely if we didn’t wait till it was cold to consume. I did like the way the poultry tasted though.

The grilled pork tenderloin and sausage (RM 39) is something I wouldn’t mind having if dining alone at Checkers. The thin sliced pork  were tender and lovely, and I particularly love the way they served the potato, in thin slices with onions mixed in. This dish is as porky as it ias tasty.

If you’re to pay Checkers a visit, do call for bookings to avoid disappointment as they have less than 10 tables even if you count the two non-weatherproof tables on the balcony. Prices aren’t cheap, but quality of food is good, and that homey feeling and very personal service is something you don’t get in most restaurants these days.

And it was another Xmas Eve Party at SS3, a yearly tradition that we’ve had since 2004 (except for 2010), if you’re counting, this was the 8th time on the same venue with the same concept – plenty of drinks, a bit of food, and a tricky gift exchange program by midnight.

The idea is for everyone to have some fun counting down to Christmas day, and at the same time an excuse to have a few drinks and mingle among like minded friends.

Carlsberg Malaysia was kind enough to sponsor us some beer for the night – we had 2 cases of Carlsberg, Asashi Super Dry, and Kronenbourg Blanc each. Thank you Pearl, Calvin, and Serin!

I made some bergedil, haze marinated pork for bbq, Fresh made santa berries

Other than the beer, we prepared some food for the night. Haze marinated more than 3 KGs of pork for BBQ and prepared a small slab of roast pork, I made some bergedil, and Fresh prepared her little cute Santaberries.

It wasn’t a dinner event, so these were just beer food.

Guests started coming in just slightly before 9 pm. In fact, David and Michael actually went to my place while we were out having dinner, talk about being too punctual.

The returning party goers were:

So that was 17-17 with a total of 34 people, a pretty nice turn out despite a few notable absence due to work, travel, and family commitments. You know who you are, and we hope to see you next year.

The most snatched gift was a sweet Puma Ducati bag from Fooi that’s actually retailed at over RM 300, Lance went home with it. Other memorable gifts include portable air bed, Chinese liquor, ice cream, Thor’s Hammer bottle opener, a couple of salami from Australia.

Terence ended up with a pair of blue lingerie, who would have thought, right?

The men in blue visited us by around 2 am and that’s when the party was winding down. The ending of this party is almost exactly the same as the one in 2008 where we had a dude in Afro K-O-ed on the floor. It was a blast.

See you guys next year!

Thai Garden Village is about 2/3 correct, it is a Thai food place that has a pretty neat looking garden, but at the same time it isn’t exactly a village. Situated at the less glamourous part of KL that is Kepong, I was first introduced to this restaurant by Kim, who is as big a fan of Thai food as Haze and myself.

Getting to Thai Garden Village is actually pretty simple, drive along Jalan Kepong either from MRR2 or Jalan Kuching (if you’re from KL) until you see a smallish Shell station, turn into West Road right next to it, and viola, Thai Garden Village is right there, almost disguised as a light industrial factory.

Parking is a pretty simple affair as they do provide ample space, the restaurant has both indoor and outdoor (garden) dining area, and can probably accomodate more than 2-300 diners.

The menu at Thai Garden Village is pretty extensive even though it is a pork free outlet.

For starters, you should never miss the raw prawn salad. This is the only place that I know of serving this in KL, and it doesn’t get any more genuine than this. Over a dozen prawns “cooked” by the acid from lime and served with plenty of cabbage and equal amount of bitter gourd and raw garlic, not for the faint hearted, but it is as rewarding as it is interesting.

They also serve a version of raw papaya salad with smoked salmon, which makes for good “yee sang” substitute if you were to have it over CNY period. Delicious even at non festive season.

The fish cake is another richly flavored affair, and goes well with the familiar Thai chili sauce.

The tomyam here comes in two versions – clear soup, and the more familiar reddish version. The “normal” version is basically just the clear type with added chili oil. Both are top notch, but ordering them at the same time was an overkill we should have expected.

Another personal favorite of mine here is the Thai style steamed lala that is usually served on an elevated metal plate with fire still burning below. The seafood is succulent, and the spicy, sourish soup was really addictive.

My only experience with vegetables here was limited to kailan ikan masin, which fared pretty well.

One other interesting dishes here is the flaming chicken, which is literally served burning (fueled by some alcohol, I suspect). While plenty fancy, I found the taste average.

Dessert choices include the standard red ruby and mango with sticky rice. The former gives a proper sweet ending, while the sticky rice could prove to be a little bit overkill on an already stuffed stomach.

Prices at Thai Garden Village is fair, an average meal should cost between RM 20 – RM 30 per person.