Mamak style rojak (also known as passember in the northern region) makes one of the best afternoon snacks.

For one, parking isn’t usually a problem since they are located at random street corners. Secondly, you get the great Malaysian al fresco ambiance. Finally, they also usually serve chendol, the perfect remedy for crazy hot max afternoons.

I’ve drove past this particular mamak rojak stall countless times, but this was actually the first time I’ve ever tried it. We ended up there when the rojak craving hits, and since it was already over 5pm, I know that my regular rojak stall at Taman Bahagia would be closed by then.

Taman megah mamak rojak, now this is my kinda food truck that's been around for decades. #kyeats #halal #rojak #passembur

Like other similar operations, this stall sells rojak, rojak mee, mee rebus, chendol, and also ABC. We ordered a plate of rojak each and I added a bowl of chendol too.

The rojak came with the typical ingredients of sengkuang mengkuang, tofu, prawn fritters, and those other things with probably tamil names I never really knew. The sauce was flavorful, sweet, and not overly spicy (tho I’m sure you can ask for more chili). I actually like it better than the Taman Bahagia version, if only this one also comes cuttle fish…

As for the chendol, other than the typical green thingy and red beans, they added “leong fun” and a bit of sweet corn into the mix. I find it pretty interesting. Would prefer if they put more shaved ice instead though, the mamak version of chendol is always a bit too watery for me, was still pretty good nonetheless.

The 2 plates of rojak and chendol came up to less than RM 10, pretty decent deal for an afternoon quickie.

The first thing we fill our stomach with when arriving dead starved (thanks to PLUS highway who decided to repave the road during Saturday rush hour) at Melaka was the pork satay. Situated opposite to the Pay Teck school on Jalan Portugis, the shop is actually just a few blocks away from the famous Jonker Walk.

Satay is traditionally a Malay dish, and most of the time prepared by Muslim, hence, with Halal meat, ie: no pork. However, in this historic town of Melaka where you can get fried pork fat in Poh Piah, it is just fitting that pork satay is served too (by non-Muslim of course)

the shop and the satisfied customers

The thing about this Xiang Ji satay shop is that you don’t really have to place any order. After you sit down, they will start to serve you satay soon as they are done from the barbecue pit. We had plenty of pork satay, liver satay and chicken satay, sadly, they ran out of my favorite: the pork intestine satay. 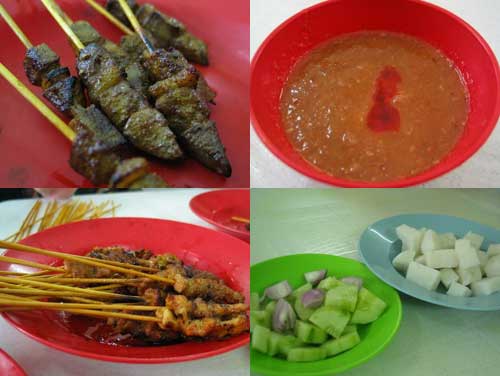 satay with the ketupad, peanut sauce, raw cucumber and onion

The portion of a single satay is not very big here, probably about half the size of those huge Ampang satay, but the taste is different. The pork goes well with their marinate tastes of turmeric and some other sauces that I obviously don’t know (probably their trade secret). The liver though, can be a little dry, but still pretty good. The chicken satay did not disappoint either.

but ARGH, why no intestine!!?! Looks like I’ll have to go there again.

After the satay, we went to Jonker Walk and to have some snack, other than the Poh Piah on previous post, we had the must-eat Chendol and also some very good otak-otak sold on a stall nearby the unmistakable Jonker88 restaurant.

The Chendol in Melaka is poured with the thick and original Gula Melaka (palm sugar) which made all the difference. The rich and sweet caramel taste of palm sugar on top of the finely shaved ice was just absolutely delightful.

Look it! I can even draw up a Melaka map!