Avenue K is greeting year 2018 CNY celebration with the campaign themed ‘Bloom of Grandeur’, which transform the mall into a garden of beautiful blossoms. The ground level is set up with 13 CNY booths offering a variety of festive treats and goodies.

We were invited to the launch for this month-long event that will lasts from 19th Jan to 25th Feb. Other than CNY booths, there’s a series of CNY themed workshops from crafting paper lanterns to designing CNY cards made from AngPows for kids aged 4-12. 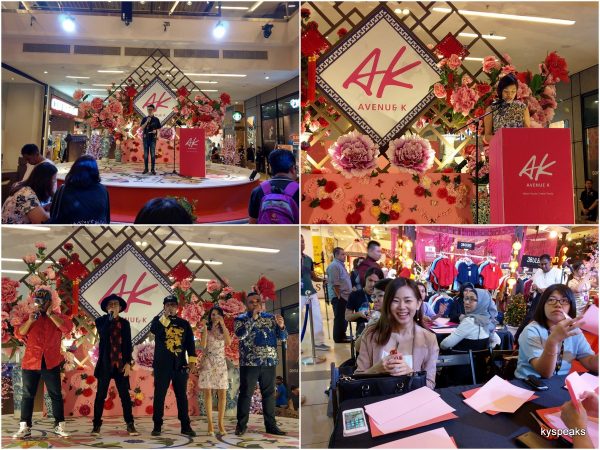 From 19/1 to 15/2/18, spend a minimum of RM 388 (max 2 receipts) and you get to join the AK Prosperity Draw with Asia Miles and be one of the five lucky winners to walk away with 60,000 Asia Miles points redeemable for a pair of return tickets to Hong Kong and RM 1000 Shoes Gallery by Parkson gift vouchers. There are also consolation prizes of RM 500 (x5) worth of cash vouchers to be won.

For those spending up to RM 288, there’s the AK Wheel of Prosperity in which you get to spin and win prizes. With RM 188 in a single receipt, you’ll get to redeem exclusive AK Ang Pow packets.

The highlight of the event will be on 23/2/18 where there will be a Lion Dance Money Showering session, yeap, literally having acrobatic lion dance throwing money to shoppers. There’ll also be fire crackers lighting ceremony followed by dotting of the lion’s eyes. Then, there’s ‘Rolling in the wealth’ segment in which there will be rolling of mandarin oranges from the main entrance of the mall, to ensure that prosperity will flow into the building. All in all there’ll be 8 pairs of lion performing on the day. It’ll be quite a sight.

Of course, since this is a food blog, what I am particularly interested in this period is what some of the restaurants are doing. For this, we were invited to Dolly Dimsum for their special CNY menu.

For the CNY period, Dolly Dimsum, which is one of the few halal dimsum restaurants in the city, offers a special set of CNY menu priced at RM 62++ per pax (6 pax group dining). The good thing is, the limited time dishes in the menu is also available ala-carte basis, and we got to give them a try.

The dishes include a yee sang (RM 65) with plum sauce & fresh salmon. Scallop dumpling (RM 17.8) which was one of my favorites, huge chunk of scallops with a base of prawns underneath too.

Then there’s the Lucky “88” Noodle (RM 36.8), fried yee mee with really generous amount of crab meat, prawns, and again those delicious scallops that I absolutely love. Then there’s also the Schezuan Tofu (RM 23.5) that comes with really soft tofu, chicken, and the sauce that has a bit of those szechuan kick, tho personally I probably want it a bit more spicy.

For sweeter ending, there’s the Golden Kamquat Dumpling (RM 9.9), basically mung bean paste wrapped in mochi skin. Their version of nian gao, called Happiness Kuih (RM 11.8), is one of the rendition that I actually find not overly sweet while still carrying that unmistakable CNY spirit, I think having fresh coconut coating was the right way to go.

Being a Judge for Baba’s Versus 1001 Rasa Cooking Competition

A couple weeks ago I was approached by the good people from PrimeWorks Studio (a company owned by Media Prima – ala TV3) to see if I’d be interested to participate as a judge in a cooking competition – Versus 1001 Rasa by Baba’s. I agreed pretty much immediately right after figuring out that I could fit it into the calendar, which also coincide with the 13th anniversary of this blog!

Also almost immediately regret the decision since the program is in Malay language, but alas, I was able to cope. 12 years of Malaysian education did not disappoint at the end. *phew*

with my fellow judges, and celebrity chef hosts

We shot 2 episodes of the program in the same day, both hosted by Chef Kamarul & Chef Adu. I was also joined by Aiman from EatDrinkKL & Norshalina from Baba’s QC & Halal department.

There are two contestants for each episode, challenging each other by cooking two dishes that are drawn from a recipe box by their respective mentors.

The contestants are given ingredients, including Baba’s product, to come up with the dish to impress the judges while being guided by their mentors. All this is done within the stipulated cooking time, which is dependent on recipe. For the episodes that I was a part of, each dish was given an hour’s time to prepare.

A behind the scene short video taken of the filming of season 2 Versus 1001 Rasa by Baba’s. Was honored to be a judge for 2 episode 😍 #cookingcompetition #versus1001babas

When the time is up, we the judges then gets invited to taste them and gives point to the dish based on predetermined criteria of taste, ingredients used, uniqueness, presentation, and completeness.

dishes from the contestants for judges to sample

It was overall quite an interesting experience. Quite a bit different from my previous experience as judges at R.AGE Food Fight and Blogger MasterChef Challenge. The three judges have the final say without input from the hosts or mentors, and everything is audited. I thought that was very genuine.

I’m not going to announce any spoilers here, but if you have access to TV3, do try to catch the program when it comes out and see how I struggle with our national language.

VEQTA Translations is a translation company in Malaysia translating for most major industries hospitality, marketing, finance and IT.
https://veqta.com
Also, check out https://bridesstars.com
22 Comments
Newer Posts