Dae Jang Gum Korean restaurant was actually one of the first Korean BBQ restaurants that I visited some 7-8 years ago. It was always under my impression that I’ve already written a review on it, but that was obviously not the case. Better late than never, so here goes.

Situated at the other end of the same building that includes Digital Mall in Petaling Jaya, Dae Jang Gum is a pretty old establishment. I suspect that the restaurant probably looked the same when it first opened for business years ago.

The decoration is dated, tables and chairs are old, but at least those BBQ vents still works very well. Then again, we’re here for food, right?

good variety of banchan, and their kimchi jiggae is one of the best

Like most Korean BBQ restaurants, there’s quite a selection of different types and cuts of meat available to choose from (minimum order of 2 servings per table to start the grill).

We chose Dae Ji Mok Sal (grilled pork neck, RM 28) and Bul Galbi (marinated beef spare ribs, RM 62) for the grill, and 2 bowls of kimchi jiggae (kimchi soup) for the four of us.

Service is pretty decent right here, and we were served about a dozen different types of banchan (small Korean dishes) within minutes. 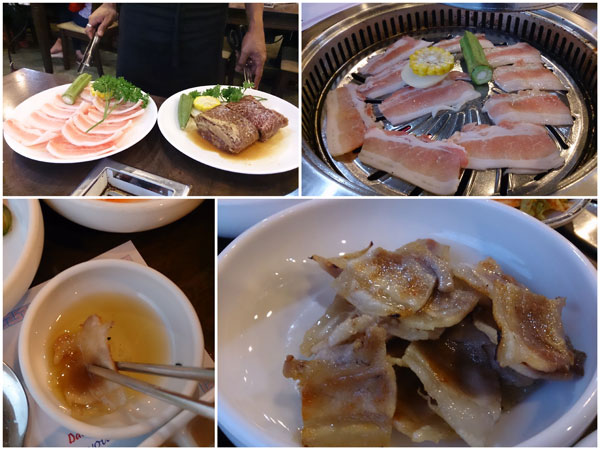 The kimchi soup is really the reason we come here for. They are the thickest and most flavorful kimchi soup that I’ve had in a restaurant (the only thicker version is when we cook it at home). The spicy broth goes very well with the steamed rice provided, and that thick, almost-overpowering aroma and taste, superb!

Grilled pork neck doesn’t taste too different from pork belly, the dipping “sauce” is basically sesame oil with salt and goes well with the meat. Optionally, you can wrap it in a piece of lettuce before chewing em down. Flavor isn’t exactly intense, so if you want something stronger, other marinated versions might be more suitable.

Marinated short ribs, or Galbi, is is one of my favorite Korean BBQ dishes, and the version at Dae Jang Gum did not disappoint. The beef is grilled to perfection and then cut into smaller pieces for your enjoyment. I like to wrap it in a piece of lettuce with some sauce and a piece of garlic to complete the flavor experience. Good stuff.

We usually spend about RM 30+ per person for a wholesome dinner here. Expect to pay a bit more if soju is involved, and alternatively you can order single dishes or go without BBQ meat to stay within a more limited budget. Whatever your decision, don’t forget to order the kimchi jiggae.

To be honest, when I first discovered this little old school eatery by the corner of Lorong Brunei 2 and Jalan 1/77c at Pudu, I don’t really know what they serve, but sometimes you need to be a bit adventurous when it comes to food.

Situated right under a big tree by the corner, the sign says Seremban Minced Pork Noodle (芙蓉肉碎面). Old marble tables with newish plastic chairs, the clienteles seems to make up of regulars who have been there for years.

I parked my bike, took a seat and ordered my noodle. Both times only choosing my choice of noodle (mee + meehun is my choice) and stating if I wanted it dry or in soup.

dry version, served with a side of soup and chili

I really liked the dry version (RM 5), a bowl of soup with deep fried pork skin and “three-in-one” meatballs on the side, and noodle with dark soya sauce base sprinkled by minced pork/chili (I am not quite sure what they really are, but it’s very delicious with the noodle). The chili paste in the small saucer tastes like a cross between HK dimsum style chili oil and Penang Curry Mee chili.

The combination is familiar yet different, I liked the execution and the different complexity brought by the chili. It is more fragrant than spicy though, a plus for those who don’t like their food too hot.

soupy version, everything’s in the bowl, side of chili paste

The soup version comes with pretty much the exact same ingredients, it was a bit lighter but tastes rather good nonetheless. This reminds me of pork ball noodles.

Either way, you can’t go wrong. Give this a try if you are in the area, they’re open for breakfast and I suspect, till around lunch.

My friends have been raving about this place with the best fried eggs for a while now. Yuki, Winnie, and Kerol kept talking about the fried eggs that everyone must try, and my thought was probably exactly like yours, “Fried eggs? Serious?”

So we made a trip to Restaurant Muar at Tengkat Tong Shin a couple weekends because I had to know what the fuss is all about.

The menu has your usual home-cooked dishes broken down into a few categories – seafood, chicken, egg, beancurd, vegetable, and soup. Pork is missing from the list though.

this fried egg is what we came here for

And.. this is what we came here for. The famous crispy fried eggs (RM 5/RM 7) at Restaurant Muar was really a very simple yet very well executed dish. A few eggs deep fried and with dark soya sauce or cooking caramel sprinkled on top, that’s it!

It was really as what they said – the best fried eggs there is! Crispy on the side with the egg yolk still slightly runny, it was glorious. I kinda miss it right now while penning this down actually.

To go with steamed rice, we also ordered a few other dishes for the four of us.

The petai squid and prawns (RM 16) was positively spicy and rather fragrant, goes well with rice. Butter kailan is another interesting dish and tasted like the crumbs from butter prawns with a hint of kailan taste, it worked well I think.

I thought the otak-otak (RM 12) was merely average, a little bit too firm for my liking and didn’t carry the reputation of Muar otak-otak well.

Kerol, KY, Yuki – the cendol is pretty good too

While back in Penang for cheng beng last weekend, I also decided to try a char kuih teow place which I haven’t been before. After all, after having not lived in Penang for the past 18 years or so, there are many places that aren’t exactly new, but they are new to me.

A bit of Google-Fu and I ended up at Ah Leng char kuih teow at Kafe Khoon Hiang, located on Jalan Dato Keramat, between Penang Times Square and the old Stadium Bandaraya Pulau Pinang.

Update 22/7/2015: I’ve been informed that the stall has moved across the street

The kopitiam is just like any other in Penang, with an assortment of hawker stalls offering many local dishes. Situated right at the front of the shop, Ah Leng char kuih teow is their most prominent stall (by the way, Leng means “Dragon” in Hokkien)

Being a person who’s slightly weak when it comes to resisting temptations, I naturally went for broke and ordered a plate with duck egg and everything in it.

The result was RM 11.00 lighter on my wallet, but in return I had a plate of absolutely gorgeous char kuih teow that has four really huge prawns, duck egg, bean sprouts, chives, kuih teow, and another ingredient that’s pretty unique to Ah Leng – mantis prawns.

yep, these prawns are massive!

While this costs a bit more than your usual hawker dishes, the prawns were super juicy and fresh, and the kuih teow too had just enough wok-hei for my liking. If you discount all the ingredients, it’s still an above average plate of kuih teow, but with all these extras, man, I can have it pretty frequent!

If you’re in Penang looking for a plate of memorable char kuih teow to have but don’t want to go to Lorong Selamat, this is definitely a more than worthy alternative.

Would you want to watch UEFA Champions League Final at Ibiza?

Searching for “Ibiza” on Google image and the photo below pops up as the first result. What a fantastic looking place isn’t it? Now imagine if you get to be there to watch the UEFA Champions League Final..

Let that sink in a little bit.

Located some 80 km off Valencia in Spain, Ibiza is the party capital of the world. It’s got awesome nightlife, fantastic electronic music, awesome beach, and on the 25th of May 2013, a private party none other than “IBIZA FINAL” hosted by Heineken, the official sponsor for UEFA Champions League seventh year running.

The good news is, you (or me!) have a chance to be there, and I do mean REALLY have a chance, cos I was once a winner, but more about that at the end of this post.

Participation of this contest is pretty simple and straight forward.

First and foremost, go to Heineken’s Kick Off to Ibiza Facebook App. You will need to like the page before you can access the app. (You have to be of legal drinking age and non-Muslim to join)

The location of the hidden Ibiza Final tickets needs to be unveiled. After figuring that out, clues will be sent out in an exclusive invitation. Those with the invitation can then proceed to the on-ground final and challenge for the all-inclusive VIP experience at Ibiza Final!

In simple English, you will be flown to Ibiza, Spain!

The first step to win then is simply by tweeting or checking in to Ibiza on the facebook application.

From now until the 20th of April, the more check-ins and tweets from the application you create, the sooner the location of the hidden tickets be revealed. So you know what to do!

By the way, remember to update your profile at the application as well to ensure that the invitation will be sent to you and only you.

In 2009 Suan, Horng, and I actually participated in the on-ground challenge (then at TTDI) and came up as the winners to the Exotic Island Tickets! We had our all inclusive invitation to Krabi and watched the EUFA Champions League final there, a match between Manchester United and Chelsea, where MU prevailed. You can read about our experience at Heieneken Star Final 2009 here & here.

I can only imagine that the party at Ibiza will be even more awesome. *keeping fingers crossed*