Exactly a week prior to the second leg of 2013 Formula 1 race at Sepang International Circuit, a few of us got invited to the PETRONAS Motorsports  Demo Run 2013. For the uninitiated, this is the only event where you get to see a Formula 1 race car zooming by Jalan Ampang right outside KLCC.

If you haven’t heard how those car sounds like, you’d be in for a treat. 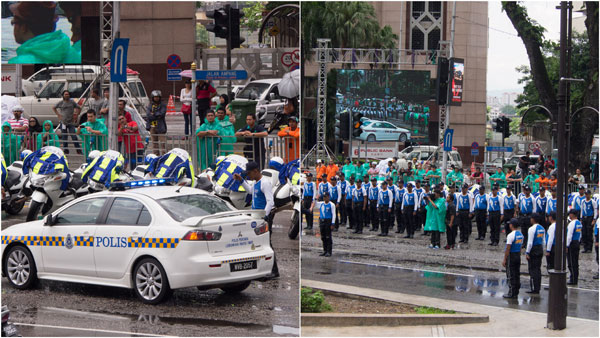 There was a bit of a shower right before the event got started, but thankfully the sky showed mercy and it got brightened up right on cue.

The first event on the program was the PDRM Traffic Drill. A few dozen traffic police arrived with their Honda VFR800 motorcycles and did a coordinated exercise drill while the commentator explained.

I was initially very confused with this, but it turns out to be a military motorcycle formation and some sort of acrobatic show instead. It was actually very impressive, 6-8 person on the stunt bike doing superman and hands free riding and everything your mom tells you never to try.

Then there’s also the jumping over 10 army personnel by a bunch of bikes. I wouldn’t want to be those laying on the floor for sure (nor the person doing the jumps to be honest). Pretty wild.

Things then got a bit louder with the racing bikes on the streets. The two wheel machines were PETRONAS Syntium Moto Yamaha AHM & PETRONAS Yamaha-CKJ (underbone motorcycles), as well as the 600cc Supersports motorcycles (essentially the race bike version of the Yamaha R6 street bike).

The riders were doing wheelies, burn-outs, and even a bit of drifting on the road.

All these were happening at the same time we were watching the Melbourne GP on the various LCD screens at the guest/VIP tent.

I got to be a pillion rider on the R6 race bike, thrilling experience (pics from TianChad)

Four lucky volunteers got to enjoy taxi sessions, with 2 in the Mercedes SLS AMG GT3 race car, and 2 other on the Yamaha 600cc race bike.

Obviously this is too big an opportunity to pass up, so I somehow managed to find the person in charged and got my name on the riding session. (which was going to be canceled initially but luckily got put back on schedule when the rain stopped)

I got cleared by the doctor to qualify for the ride, then put on full leather riding gears and got on the bike with professional rider Shahril.

Man, what an exciting ride that was. The dude showed no mercy and accelerated that bike really hard, followed by equally hard braking when we ran out of road. A quick sharp turn and then we do it again into the other direction along Jalan Ampang. Rinse and repeat 4-5 rounds and I felt more drained than if I was riding my own bike for an hour. I grabbed onto the pillion handle real hard, without which I’d have ended up on the floor.

Thank you Shahril & PETRONAS, that was the most thrilling experience on 2 wheels I’ve ever had.

Then there was the PETRONAS Syntium Team doing their thing, show casing how they can change the tyres of Mercedes-Benz SLS AMG GT3 race car in literally just a few seconds. The GT3 car did a few quick laps around the road too, what a gorgeous car, I actually have one diecast version at home from buying Grand Tourismo GT5 PS3 game, sitting on the rack in the study room.

Of course, what everyone came to see was the Formula 1 car, and man was that a sweet sounding machine. The MERCEDES AMG PETRONAS Formula 1TMrace car came out and did some laps on the road. Fast, sweet looking, and definitely loud too. Many gigabytes of memory card space were filled with photos of the F1 W04 race car that evening. Stunning car, would love to be driving in one (but I guess that will have to be confined to video game experience..)

We had a great time at the event. Seeing some of those machines in action up close and personal was definitely an experience any racing fan would not miss. On top of that, riding on that racing bike at over 200 kmh outside KLCC is something I’ll never forget, awesome day!

Wanted fish & chips but was turned away, we ended

While in Langkawi... eat like a local, our choice

Those who are from Perak said there's no such thin

I thought this dried curry mee with roast pork was

My favorite dish ever at Suria KLCC. Probably ove