Another diving trip for the year. This time at Tenggol island for a short 4 dive 2 days 1 night excursion.

Tenggol island always have a special place in my heart, it is where I got my PADI open water certification many years ago, and also the first vacation that Haze and I shared over 2 years ago.

It’s going to be first time diving for Haze here and only her 3rd diving trip. Boat is leaving in less than half an hour, hopefully we see something awesome!

Have a great weekends, and to all Muslim friends, selamat berpuasa

If you are from the x-generation or .. ahem, older. Chances are you have own at least one TV in your life that you bought with your own money. My very first was in the picture you see below.

It was a behemoth of its time, a massive 32″ CRT TV that comes with a remote controller and two different sets of inputs (front and back!). Heck, even the screen is sorta but not entirely flat, an awesome feature in its time. Of course, it also weighs as much as a porcelain kitchen sink and as thick as refrigerator.

In fact, it was so heavy my friend’s dad had to take a day off after helping me move this baby to a new house.. due to back pain. Sorry uncle Harvey.

Well, that was also more than 10 years ago.

TV has come leaps and bounds since, and recently LG put up a preview party for bloggers to showcase their 2012 Cinema 3D Smart TV lineup at Gardens GSC Signature, and the reception was rather awesome. Those who attended the event were left impressed with the line up that LG has to offer.

Attendees had a chance to try out the immersive 3D experiences delivered by the largest 3D Smart TV in the country, and there were also showcase of Dual Play technology – which allows you to play 2 person games with 2 TV, instead of traditional top/bottom or left/right split screen method.

LG’s offering is head and shoulder ahead the competition, the recent CNET Asia 3D TV comparison have LG TVs ranked first, second, and third. That is saying something isn’t it?

LG’s Smart TV has all the bells and whistles built in, and not just something with a pretty design. It’s DLNA ready, you can watch Youtube on it, play movie straight out of thumb drive/network, and so much more.

our very own LG party at a friend’s house

You can watch flicker free 3D movies from blueray, 3D movie files, and more impressively, convert ordinary videos to 3D by the touch of a button.

How I know this? A friend actually hosted a small party just to show case his newly bought LG 3D TV not long ago, and we were all mighty impressed. True story.

To keep up with more news and latest technologies with LG 3D TVs, check out LG’s TV/Audio/Video blog.

Most of my raw seafood are sourced from mom, who works at a wet market in Penang. She’d pack them frozen in layers of newspaper so that they remain as such during the journey back to KL. The interesting part is, I usually never really know what I’m getting.

So the latest shipment includes squid, one of my favorite seafood, but also one that I have little experience in preparing. I scouted around the internet a little bit and came up with this recipe of deep fried butter squid, an inspiration from several sources, and some personal preference in taste.

This dish takes a little longer and more steps than most my other recipes, but the end result turned out pretty good, definitely worth the effort and it’ll be something that I shall make again.

What I really like about this dish is the infusion of butter into the crunchy layer of the squid as well as the fried garlic/ginger. The chili adds a different dimension as well as giving the dish a little bit of a kick. Fresher squid would yield an even better result in my case, but overall the turned out was better than expected.

Check out my other recipes too if you like these style of cooking. Bon appetite!

Japanese cuisine in Malaysia has come a long way, from simple conveyor belt sushi and high end traditional Japanese restaurants in hotels, we now have a wide variety of price point and different variations to choose from.

Senjyu is one of the newer Japanese outfit that tries to carve a niche in this rather mature market by trying to infuse a little bit of contemporary taste into traditional Japanese cuisine, while maintaining a pretty affordable pricing. At least that’s what is claimed.

I was invited to Senjyu at Bangsar Village 2 for a session of food review a couple weeks ago, and I gotta say their claims weren’t far off.

Senjyu, which means “eternity of life”, is located at 3rd floor of Bangsar Village 2 and took over the former location of Sakei Sushi, which is the chain that is owned by the same operator. I wasn’t a huge fan of Sakei (or most conveyor belt sushi restaurants), so I had a bit of a doubt at first when receiving the invitation.

The restaurant is decently decorated though table arrangements could perhaps use a little bit of imagination. Having them all lined up in grids isn’t very exciting, even with beautifully placed paper cranes at the sushi bar.

Anyway, lets get on with the food.

We started out with the Carpaccio Mori (RM 22) – thinly sliced raw tuna, salmon, and butter fish that is served with 5 types of sauces and a bit of sesame and thinly sliced vegetable. It is an inspiration from Italian cuisine perhaps, but with Japanese ingredients. The sauce has a slight spicy taste to it, pretty exciting and the end result was actually very good. I like it.

Iso Moriwase Sashimi (RM 68) is good for 3-4 person, and comes with yellow tail, salmon, octopus, sweet shrimp, butterfish, surf clam, and one raw oyster. Fresh grated wasabi is served with the sashimi, which makes a big difference if you love wasabi. The seafood too were very fresh. For the price, this is a great value. 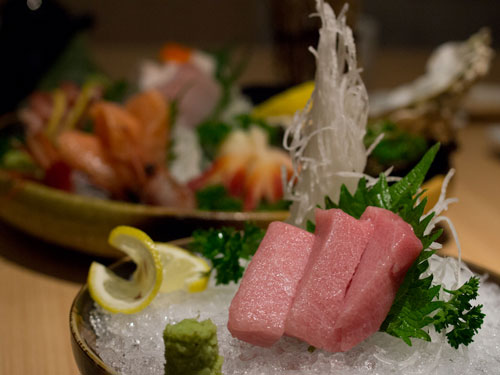 One of the most sought after sashimi cuts – Toro, is available with a price. For RM 70 you get three pretty thick slices of these air flown fatty tuna belly meat. They are like the grade 12 wagyu of the tuna world, and absolutely yummy. If you are to splurge, this wouldn’t be a bad option.

Salmon Ikura Hana (RM 16) is prepared by air flown raw salmon and topped with mayonnaise and salmon roe. A winning combination if not for the little problem of having a bit too much rice in them. Wasn’t very easy to have everything in your mouth at one go, and there isn’t any graceful way to not do that either. Tastes pretty good though.

Have you ever had the problem of wanting to order a maki (sushi roll) but did not want to commit into eating 6 or 8 pieces of sushi that has the same ingredients? Well that happened to me a lot, and it is refreshing to see that Senjyu offers maki that comes with two different ingredients in one order, in this case, the Soft Shell Crab and Unagi Mentai Maki (RM 28).

I love the soft shell crab maki, it was crunchy, rich, and has an explosion of taste that leaves you wanting more. The unagi mentai maki, on the other hand, sounds like a good promise, I like unagi and I love mentai, but the combination somehow came out to be a bit less than the sum of two, maybe it is the way they chop up the eel? But don’t get me wrong, it is not bad at all, just not as good as I’d anticipated.

They serve one of my go-to Japanese dish too – Chirashi-Jyu, and at RM 30 per pop, a great value for money. There’s salmon, butterfish, tuna, octopus, and of course, tamago (sweet egg omelete). I haven’t seen this much seafood in a bowl of chirashi sushi priced RM 30 and under.

According to the PR ladies, Senjyu has gained a reputation for its live Canadian oysters, and we sampled this via the Trio Oyster dish (RM 48) – mentai oyster (cod fish roe), fresh live oyster sashimi, and simmered oyster in broth.

I love all three versions, the freshness of live oyster clearly give it a superior taste. To be honest, I probably would like them best just fresh, the extra preparation though, is good for those who doesn’t really like this shell fish raw.

wagyu beef shioyaki – chef showing us how to get it done

Wagyu Beef Shioyaki (RM 68) is another premium item on Senjyu’s menu. If you’ve had wagyu, you know what to expect. Slightly salted wagyu beef served raw in a DIY cooking style. If you like wagyu, you will enjoy this.

Next was tempura in the form of Giant Ebi Tempura (RM 38). Now these prawns are huge, and there were some half a dozen or so of them. Crunchy, succulent, and fresh, I wish I wasn’t so full by then.

Our last dish of the tasting session was Gindara Nitsuke (codfish, RM 40). A more subtle tasting dish, served with assorted mushroom and vegetables that could be better if the fish was slightly less cooked.

And yes, that was a lot of food for two person. Haze and I were over stuffed for the night, but we left with satisfaction. Not everything is 100% awesome, but they were quite a bit above average, and priced very competitively.

Which is also why we went back. This time with Kerol, Horng, and Yuki too. We tried some of their set meals, inaniwa noodle and cha soba, and I took the opportunity to order the foie gras maki as well.

The girls enjoyed the set meals. Portions were pretty big, and our noodle were pretty decent as well.

The foie gras & oyster maki, well, lets just say the foie gras was a bit too thinly sliced to properly satisfy my craving for the goose liver. It was okay, but I think to really enjoy foie gras, you gotta have it pan seared.

KY, Haze, Kerol, Yuki, and some desserts at Senjyu

Senjyu does offer pretty interesting desserts too, there’s the frozen mango+orange sorbet, the macha pudding with ice cream (RM 10), and parfait too. There were pretty decent, and if you still have room to spare by the end of dinner, well, try one.

Listen ma, I’m on the Radio!

This marks another milestone for what started out to be a random blog of sort roughly 7.5 years. I had my very first radio appearance on Bernama’s Radio 24 last night with Gerard.

It was a 40 or so minutes of talking about the blog, a bit of myself and time spent in the states, as well as the upcoming Nuffnang Blogopolis that is happening tomorrow (in which I’m a speaker too, so that’s another first).

me getting ready just before the interview

If you happened to have been listening to 93.9 last night’s The Longue @ 8Twelve Live, I hope I didn’t make a fool of myself. Will see if they will put up a podcast.